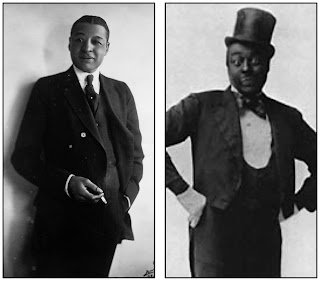 Born in the British West Indies, Williams joined a U.S. minstrel troupe while still in his teens. He soon teamed up with George Walker. “Williams & Walker” became one of the most popular acts in vaudeville.

Williams was light-skinned, Walker was dark... and they both performed in blackface. But Williams & Walker moved beyond cooning to a more universal, humanistic kind of comedy.

As a singer and songwriter, Bert Williams was the most popular black recording artist of the early 20th Century. Click here to hear a Williams recording from 1901(!): “She’s Getting More Like the White Folks Every Day.” (Available on this CD.)

Williams was also a gifted mime. One of his famous stage routines was a pantomime poker game. The 1916 short film below ends with Williams performing that bit. It’s a wonderful cultural artifact.

UPDATE (04/02/08): Thanks to DeAngelo Starnes for pointing to Greg Tate’s piece for EbonyJet.com today. I was unaware that a new Bert Williams biography recently came out. It’s called “Introducing Bert Williams: Burnt Cork, Broadway, and the Story of America’s First Black Star,” by Camille F. Forbes.

This is a timely post. Greg Tate actually wrote a strong article on Bert Williams in today's ebonyjet. Here's the link:

Thanks, DeAng! I didn't know about that. I'll update my thang...

Thanks for posting this info. I was actually planning on doing some research on Williams.

It's hard to find information on many of these performers. I saw Johnny Huggins in a bizarre short film by Jean Renoir and he was in blackface, but I haven't been able to find much of anything about him beyond the fact that he was a performer in "La Revue Negre" with Josephine Baker.

I'm going to get that Bert Williams biography for sure, thanks for the heads up.

Not only was Bert Williams fabulously talented; he was FINE! Thanks UBM and Deangleo. It's too bad some people can't get behind the burned cork to see the real genius of this mind.

I am reading the book now. Fascinating and insightful.