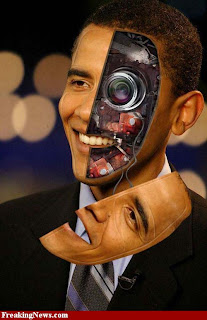 Another good night for Barack Obama, another rough one for Hillary Clinton.

Interesting thing I noticed watching Obama’s speech in Texas tonight. Early on, he said “Y’all know how to do it here in Houston.” He also gave “a shout-out” to one of his supporters; another supporter was “in the house.”

No major presidential candidate has ever spoken this way. And it didn’t come across as racial but generational. He’s speaking to a young generation whose language has been shaped by hip-hop. Very interesting indeed.

In the minus column, the Obama campaign sent a Texas state senator onto MSNBC last night to hype Barack. Chris Matthews made this poor jerk look like an idiot... totally unprepared to do what he went there to do. Follow this link to the Huffington Post if you haven’t seen the video yet.

As for that image above, I got it from a site called Freaking News, where Photoshop geeks gather to share manipulated photos. The “cyborg” Obama was posted in late 2006, among other Obama images... some of dubious racial sensitivity.

Race is a recurring theme among these frolicsome Photoshoppers. A recent topic was “Black Celebrities,” which means white celebrities rendered black.

I must say, this “Black Bob Dylan” is kinda tight: 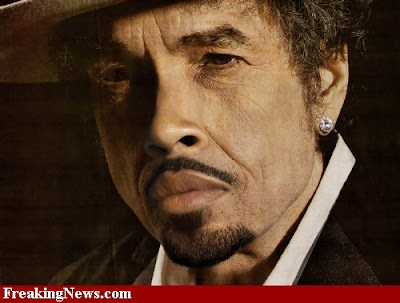 Barack with Bling is the funniest. Clinton,Bullock and Hopkins look like South Asians. Clearly Guliani looks better black, let's he hope he never finds out.

That Chris Matthews/State Senator moment was super cringe worthy. Kinda took me by surprise since most election result interviews are totally softball anyway.

Did you get to see Keith Olbermann challenge Chris Matthews about it? Chris wasn't expecting that one, just like the senator. :) love it.

Good find, UBM! I used to do this stuff all the time using photos of baseball players. :-)

Obama Bling is really good! So is that West World lookin' one.

Of the "Black Celebrities" attempts, that Dylan job is the best, by far. The Angelina Jolie attempts seem a little ironic or redundant? I can't think of the right word.

I may not always agree with Chris Matthews, but he certainly knows how to make a point. And I think he made about 2 or 3 with just 1 question.

As Barack has gotten stronger, Hillary has been clutching at anything to steal his shine. She recently released a music video and she's also co-opted his catchphrase.

Big Man: Thanks for that. That was just sad. Ridiculous.

And wasn't nobody chanting along, either. Two guys were looking at each other like, "What-da-fuck...?"

After spending the last few days trying to mock Obama's rhetorical gifts, they turn right around and play into his strength.

I tell you what, though. Team Obama better put out that Michelle Obama "proud-of-my-country" brush fire.

Did you get to see Keith Olbermann challenge Chris Matthews about it? Chris wasn't expecting that one, just like the senator.

Oh Wanda, it was all good... It was all fantastic. I hung around past midnight to watch it all over again.

And if you know Chris Matthews, you know he's gonna rehash the whole thing on "Hardball" today. Make the panel discuss it.

I may not always agree with Chris Matthews...

Yeah, Curious... it's like his entertainment value is far exceeding his substantive value. He's always cutting off his guests. I can tell it pisses off the MSNBC political guru, I forget his name... the goatee guy.

But absolutely, Matthews made a point last night. Good reminder to the Obama campaign: Don't slacken up... don't take anything for granted... don't relax, sweat every detail...

Here's a funny thing a lot of people may not have noticed. Did you see the Obama victory speech. When he started it, there were all Black people behind him.

Most of those "Black" celebrity Photoshop jobs,have them looking more like Zombies than anything else.
Guess they think all it takes is a darker shade and big lips/nose.

A watermelon, a glock, and prison stripes?

I checked out that blog Big Man linked to and found this quote: I mean, think about where you've heard this scenario before: A brother or sister works hard to craft an original expression of emotion that appeals to people, and then watches as a crafty white person steals it and tries to make it their own.


I'm sure you can tell what my particular problem with that is....