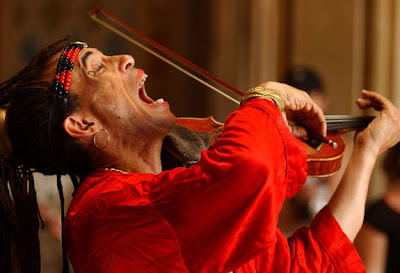 Big thanks to Bay Radical for introducing me to Thoth, a biracial, ambisexual performance artist. Thoth is fantastic... the very epitome of eccentric blackness.

His album “The Herma: The Life and Land of Nular-in” is available on iTunes. I’m streaming the track “Nular-in” on my Vox spot. Click here to listen. (Thoth sings in his own made-up language!)

Thoth was the subject of an Academy Award-winning documentary short film a few years ago.

More recently, he appeared as a contestant on “America’s Got Talent.” Thoth’s art was not appreciated by those Philistines:

Thanks for the shoutout UBM. I haven't posted in forever but I hope to get something together on the 1969 SF State Student Strike this week.

As for Thoth - I used to see him playing in BART stations all the time until he got priced out of San Francisco during the dot com boom.

Priced out of SF? Last time I saw Thoth was in Central Park a couple years back holding court under a pedestrian bridge and even my friends living in Bed-Stuy pay more rent than I do in SF...

Civic Center BART was being entertained by a less theatrical but more eccentric violinist last I passed through-- he had a music stand and sheet music but was playing like he was a deaf epileptic... Watching people hurry past covering their ears was always worth a smile and it was interesting in its way... For the life of me, tho, I can't remember what race the guy might have been... I'll have to go check...

Well, according to some article on the internet, he moved to NY so he could live rent-free with his mama.

My favorite BART musician is the guy who plays "Oh! Susanna" on what I presume is a huqin.

Okay, it took a couple of days to have my mind accidentally stumble across a possible contender for eccentric blackness which, considering I was born and bred in San Francisco, is a little surprising... So does Vaginal Davis have a place in the upper echelon of zaniness? It also reminds me that I keep wanting to go back and re-watch "Paris is Burning", a documentary on poor black drag-queens in New York...

Hey Brendan. When it comes to eccentric blackness, there's a fuzzy line between those who are outrageously weird as a matter of calculation, and those who just can't help themselves... the genuine eccentrics.

Vaginal Davis I would put in the former category. He can be entertaining, though.

Not feelin' you on this guy. The Nular-in piece was far more listenable than his "America's Got Talent" piece -- but it didn't showcase his talent as a musician as effectively.

Yeah, he's talented, but he seems pretty much another sad casualty of the "racially" polarized society in which we live. I have to wonder. Had he a more nurturing/affirming experience in his formative years and embraced his blackness rather than clearly trippin' on/away from it into some weird, indeterminate ethnicity of his own concoction -- complete with an ersatz language -- could he have been another Coltrane? Another Ellington? Or, with that vocal range of his, a powerful, moving vocalist?

We'll never know. And it's too bad. Not to completely diss the brother, but in the end, it seems to me another case of black genes on crack.

^ Harsh, deecee. But I must admit, I never drew a connection between his make-believe language and any sense of racial alienation.

But I keep listening to the "Nular-in" piece... it's really something. His voice is remarkable.

I'm all for freaks, so I'll be digging deeper into Thoth's album.

It's not just the language. It's the whole get-up/persona. One of the U.S. Native American tribes? Maya? Aztec?

A weird name that sounds like an inversion of "lunar." (Sun-Ra on acid? lol) And, yes, the invented language.

You understand what I'm getting at?

Looks like he's trying very hard to reinvent himself as virtually anything but a Blackman -- as an exotic of sorts -- which is a classic hang-up of "bi-racial" Black folks.

And I seem to recall that in response to one of Sharon Osborne's questions (no time to play it back -- deadlines) -- he says something about doing what he does to feel better about himself -- or something to that effect.

Sorry, but he's a classic case.

Not that it's a criticism; just an observation. There are lots of people walking around with issues. At least his is a creative response.