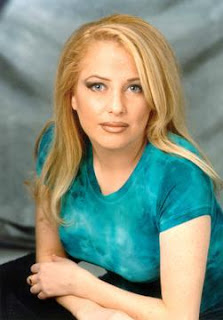 Far-right bloggers can be so entertaining. You really should add a few to your blog diet. Take Debbie Schlussel. She live-blogged the Oscars.

Who is Debbie Schlussel? Well... she describes herself as an “Attorney, Columnist, and Hip, Conservative Info-Babe Commentator.” And she’s a movie fan. Let’s see what we can discern about Debbie’s politics and personality from her Oscar-related commentary:

“It was the dreadful Tilda Swinton of the dreadful ‘Michael Clayton’ wearing an equally dreadful black satin pillowcase. Oy. ... Yet another androgynous ‘woman’ wins an Oscar for a female role.”

“Penelope Cruz is talking. Someone please get me an interpreter. Listening to this woman is probably more annoying than listening to Hillary Rodham Cankles. Oy. Make it stop.”

“Cameron Diaz . . . Official Spokesmodel for Hollywood liberal airheads (and smoked too much pot before the ceremony).”

And that’s just a small sampling of the wit and wisdom of Debbie Schlussel.

Isn’t it uncanny how she can put into words exactly what everybody is feeling as we watch the Academy Awards? “Daniel Day-Lewis – self-hating Jew.” We all thought it; Debbie Schlussel said it.

Why isn’t this woman as famous as Ann Coulter and Laura Ingraham? You go, Debbie Deb! Give those Hollywood liberals and androgynous “women” and self-hating Jews hell!
Posted by Undercover Black Man at 11:36 PM

People like this crack me up. I can really only read so much before my head explodes though.

Every so often I pick up a Coulter book and skim a few pages. It tides me over for a long, long time.

This lady looks like she's gunning to be a competitor.

She can be biting but she's a bit too unhinged to make it as big as Coulter, who is tolerant and soft spoken in comparison.

Check out this bit of journalism from Debbie:

She goes a bit crazy in the comments section when someone dares question the quality of her work.

Also good to have a heads-up on this particular line of attack... which someone will eventually pick up on.

^ Just got to the comments, Abe. Whoa nelly!

When your politics so dominate your everyday thought that you can't even enjoy a movie without having to cast it politically...

Indeed, Andy. What a burden.

Am I a bad person for snorting at the 'Hillary Rodham Cankles' line?

I've tried to read her stuff before, but the taste of bile just meant I couldn't get all the way through it.

Evidently, there is some unwritten rule that these right wing female bloggers must be pseudo attractive. Like Ann Coulter from a long, long distance before you realize she's actually Vincent Schiavelli in a wig.

The headshot of Schlussel indeed fits this criteria, but then you see what she actually looks like, and you realize that she is, in fact, Linda Tripp without all the class.

I tried to understand Michelle Malkin and Debbie Schlussel a few years ago, but honest to God just the sight of that pic and their websites makes me sick.

Can we start a protest movement to discredit good-looking right-wing pundettes by adding the phrase 'and the angry inch' every time we utter their names?

omg david. do you have esp? i took a oscar break to hit up the white castle here and on the way i ended up listening to this woman. if you think the liveblogging was crazy, you should have heard her live. Say what ever you want about Limbaugh, his wannabees are really out there.

Like Ann Coulter from a long, long distance before you realize she's actually Vincent Schiavelli in a wig.

You know, that's an insult to Mr. Schiavelli! :-D

There's a (foreign?) word for people who look good from a distance, but I can't remember it.

I clicked on the picture of her real look, and she's bragging about "how she broke the story of "the Muslim footbaths".

It's a signal for "Republican dick goes here."

What gets me about all the Righties is how, when they do get a good line, they goose step that sucker to death, over and over, no deviation, on point, Everywhere.....Which makes it appear to their Crumb Buckets, that it must be true.

She used to come on the Howard Stern show when he was on free radio. He used to always ask her how her dating life was and crack that all she wanted to talk about was Al Qeueda

"When your politics so dominate your everyday thought that you can't even enjoy a movie without having to cast it politically..."

I'll co-sign on that because it kind of sums it up for me as well.

I fail to see her view that "Blood" was an anti-Christian movie. ONE character was a fake preacher. And instead of constructively critiquing Lewis's performance, she boils it down to him being a "self hating Jew."

When I see someone like Schlussel, I see someone screaming out for attention.... most likely because they weren't hugged enough as a kid.

I'm not a fan of Schlussel, but I do agree with her on "No Country for Old Men". What was the point of that movie, other than showing some cool violence? Do we really need that when lots of real, horrible violence is occurring all around us? Violence sucks, and it's time Hollywood stopped glorifying it.

some funny ass commentary about Ms. Schlussel on this post.

"What was the point of that movie, other than showing some cool violence?"

The movie is a rebuttal against the idea that things have been getting progressively worse and more violent in this country recently, basically saying that, in fact, the country has always been just as violent as ever, but, as people [or just men, maybe] get older, they grow less and less tolerant of the violence and more sensitive to it.

This is the point of the climax -- the scene with the uncle. The final scene of the movie, the one people complain about, is the denouement. If they had used the standard cinematic trick of having that speech as voiceover instead of a monologue in close-up, everybod would've realized that. (But they chose something way more interesting.)

And also, similar to 'Fargo', the horrible, realistic violence is contrasted by humans like Sheriff Bell who see the violence and process it, but somehow manage to remain optimistic in spite of it all (in his case, he loses a lot of his optimism but, after settling into retirement, regains a little bit of it, as described in his dream).