Salute to TV writers: ‘All in the Family’

Television writers went into the current strike knowing it could be a long one... knowing that the studio bosses won’t do a fair deal out of the goodness of their hearts.

But all the ups and downs and twists and turns between now and strike’s end are of diminishing interest to me. 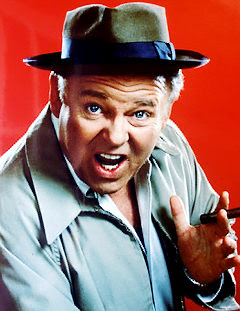 What I’d rather do is celebrate TV writers. And remind the world of what we do... and why we deserve respect.

So, for as long as this strike continues, I’ll be shining a spotlight on some good TV writing. Starting with “All in the Family,” a brilliantly written show, a jewel of American pop culture.

I’m streaming a 4-minute audio clip from a Season 1 episode of “All in the Family.” To hear it, click here. I realize television is a visual medium, but I’m using audio for a reason: So we can focus on the words.

The clip I selected comes from Episode 8, titled “Lionel Moves Into the Neighborhood.” The credited writers are Don Nicholl and Bryan Joseph. This scene was included on an “All in the Family” LP released in the early ’70s. (Yes, my vinyl stacks are deep!) 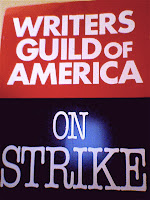 I believe this is the first episode of the show written by Mr. Nicholl, who went on to bigger things. He and two other “All in the Family” writers – Michael Ross and Bernie West – co-wrote the pilot script for “Chico and the Man” (along with James Komack).

Hope y’all enjoy this flashback. And the ones to come.
Posted by Undercover Black Man at 12:29 PM

The clips are cool and all.

What I wanna know is, what's up with ya boy John Ridley?

^ You know what? Now that I'm back in town, I'm gonna reach out and try to interview him. Never met him; don't know if he's ever heard of me. But I'll try.

Not to attack him. But definitely to talk frankly.

I like the idea of tributes to good television writing from the past.

There was a lotta good shit in the 70s on tv. A lotta schlock. But some very good shit was thrown in the mix, too.

But you're right. And I just got a DVD-to-MP3 ripper. I really like the idea of streaming only the audio... so as to focus on the words, and feel closer to the storytelling mind, the imagination...

I was really young when this show was on the air. I think thats the reason I never got the scarcasm, the tongue-in-cheek humor that the writers of the show intended. In fact, I wouldnt watch the show because I thought it was racist! Eh, well, live and learn.

^ lola, re: All in the Family. I agree most of the subtleties went over my head back then. And when you learn about what kind of guy Carroll O'Connor really was you realize the depth of his performance.

When he died, TvLand did a retrospective on All in the Family. Weekend long nothing but All in the Family. I had the flu so I watched all that shit. I came away from that show with a newfound respect for him and the writers of the show.

You really think "All in the Family" was that good? I know I liked it when it first came out, but seeing it in reruns later, I don't know, it's awfully dated. (Whereas shows like "Dick Van Dyke," "Bob Newhart," "Dobie Gillis" and "Car 54" still hold up very well. I used to watch them for hours on end on Nick At Nite.)

Norman Lear's intentions were good, I suppose, but in retrospect his depictions of minority characters were kind of condescending ("The Jeffersons" was redeemed by the brilliant Sherman Hensley, not to mention Isabel Sanford and Marla Gibbs).

"Good Times" likewise was like Elvis Presley's "In the Ghetto" made into a TV show.

Lear's well-meaning liberalism was preferable to the sort of "politically incorrect" teeth-kicking that passes for "topical humor" these days, I guess, but still isn't to my taste.

Just my two cents worth!

I appreciate you weighing in, John B. You know what? I had feared that "All in the Family" would age badly.

But then, a few years ago, I caught a rerun of the episode with Archie stuck on an elevator with Roscoe Lee Brown as a well-to-do Negro, Hector Elizondo as a Puerto Rican janitor, the Puerto Rican's heavily pregnant wife, and a hysterical white female.

It was stunning. Funny as hell.

That type of frank conversation about race is rare on TV today, so the racial humor still packs a punch.