Right-wing comedian is proud of his ‘nigger’ joke

I’d never heard of Evan Sayet before last night. He’s a comedian who wrote for Bill Maher during the early days of “Politically Incorrect.” 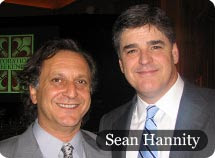 Sayet says he used to be a typical Hollywood liberal; now he’s a conservative... with a website featuring pictures of himself alongside Sean Hannity, Ann Coulter, Michael Medved, Larry Elder and David Horowitz.

Last night, he was on KFI’s “Joe Hicks Show” (Hicks being the only black host on that talk-radio powerhouse); he was promoting an upcoming “Right to Laugh” gig in North Hollywood.

Dude didn’t impress me with his sense of humor on the radio. Not at all. But I figured I’d look into him... see if it might be worth my time checking out his show and blogging about it.

As it turns out, Internet personality Luke Ford posted an interview with Evan Sayet last month. Ford even uploaded audio files of their phone conversation.

At one point, Luke Ford asked him whether standup comedy is the only place in society “where we can talk honestly about race.”

Sayet responded with a very unfunny joke involving Michael Richards, Al Sharpton and the N-word. Click here to hear it. (The sound quality is about as poor as the joke itself. If you can’t understand him, read the transcript on Ford’s site.)

What cracks me up is hearing Sayet describe that dumb shit as a “witty observation.”

No... what really cracks me up is Evan Sayet charging $30 a head for his “Right to Laugh” comedy show. (Including a buffet.)
Posted by Undercover Black Man at 10:01 PM

Whatever happened to the "good" conservatives...the ones who don't associate with people like Hannity, Coulter and Horowitz?

And man was that joke awful. It seems like he is trying to hide some racism there. I guess he became a conservative so that he could hate more easily.

I find nothing so tiresome as "political" comedians, and that goes for comedians that I would otherwise tend to agree with, like Al Franken.

Hey, he's able to charge $30 to tell godawful nigger jokes because he knows his audience. Yes, he would tank if he ever faced a general audience because successful comedians tend to make people think and reflect on their own experiences. His specific audience just wants to feel superior to other people and he caters to that need

This is a link to the Heritage Foundation speech that put Sayet on the map. "How Modern Liberals Think." It's been floating around for a year but I haven't had the guts to get through ti.

And this is his blog.

Guys like Sayet are why I can't deal with any self-identified conservative or republican anymore.

thats a shame, thats why i wrote what i did for King Weekend .chk out my post about the King THANK WE FREE

I wish that jackass would quit saying he's a Springsteen fan.

He said he became a conservative or at least starting hanging with Repubs after 9/11 made him all scared and angry at brown people, and that liberals were all 'blame America first', so the paranoia is consistent and isn't some act. He seems to be a committed movement conservative.

john b., I like left-wing political comedians and some right-wing comedians, sometimes. Penn and Teller come to mind as guys in love with the war that are still funny even when talking about my own views. Al Franken simply isn't funny, as Garofalo has NEVER been, but there are people who do make me laugh at some of the lunacy and depravity of the Republican Party. Lewis Black is one extremely obvious example.