Playlist: Jams from my college days 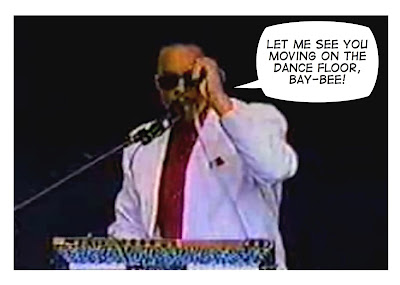 Justjudith inspired me with the theme of her blog post tonight: favorite jams from her days at Howard University.

I am prone to powerful fits of nostalgia for my own college era (at the University of Maryland, College Park). Being that my era predates Judith’s by about a decade, I am also moved by a certain generational arrogance to educate this youngster. To wit: Our early-’80s funk was the best!! (All you middle-aged muhfuggas feel me, right?)

Click the song titles below if you wanna trip along with me...

Luther Vandross’s breakout year was 1981 (the “Never Too Much” album). But the year before, Luther was all over the airwaves with his featured vocals on two tracks by Change.

For some reason, this one evokes wistful feelings in me.

In college, I was jonesing heavily for the P-Funk... at a point in history when George Clinton’s Corinthian colonnade of Rhythm-&-Business collapsed into dust (which George then freebased).

So when George and Bootsy dropped guest vocals on this 1982 joint, verily did I pop a chubby. The funk nerd in me still cracks a smile over George’s self-deprecating in-jokes. (“We sure do need a gig, don’t we, Bootsy?”)

I swear to God, don’t you miss when black radio sounded like this?

Yep, I was into Zapp too. Big time. I can’t dance a lick, but I loves the funky music. Ain’t that strange?

I saw Roger Troutman and Zapp at the Cap Centre, opening for Prince on the “Controvesy” tour.

5. “Weak at the Knees” – Steve Arrington’s Hall of Fame

Steve Arrington is way underrated as a funk vocalist. To slip back into P-Funk geek mode for a second, I would put him up there with Garry Shider.

Even though it came out in 1981, “Funky Sensation” to me pointed a way to the progressive, clubby funk sound of the mid-’80s. I know that might be slicing it rather fine... I’m just saying this track was ahead of its time. And it still kicks major ass.
Posted by Undercover Black Man at 9:46 PM

lol, thx ubm. someone thinks of me as a youngster! but i do have a brother who is close to your age and he was a dj. so it wasn't college for me, but i loved y'all's music too! anything is an improvement over the crap they have now. roger and zapp didn't get as much overplay as t-pain and their music was waaaay better. of course, the music from my college days was THE best :) i think it's the way you feel when you hear it that makes you think it's the best music ever made. sadly, someone will think this way about lil jon in ten years.

What does it say about me that after reading your fabulous blog for so long, what gets me to post are your musings about your college playlist? Thank you so much for taking me back to my own college days.

Good Lord. Fantastic. Thanks so much for the memories.

I'm with you on Change, my fave by them is The Glow Of Love. Luther has never sounded better!

"Weak at the Knees" is one of the best funk records ever.

i always say that Steve Arrington as a vocalist was just straight ignorant; he didn't give a fuck if his singing sounded pretty, or crazy, or high or whatever.

and so cocky! i had to check out that album just on the basis on the song title "You Meet My Approval"!

Ok, I have to say that I dont recognize 4/5th of the songs you listed, lol. You are showing your age here.
:)
L

For all the young'uns not familiar with the songs on the list, I really urge you to take a listen, and then go get other selections from these artists. This is some GRRRREAT stuff. I don't mind showing my age when it comes to the music. ;-)

^ School 'em, portiapm5! What you spinning?

And thanks for de-lurking.

Now I might have go an play that Best of Slave, Feat. Steve Arrington comp. Steve was the man! (I wonder if he'd be going to Hollywood after auditioning on American Idol?) Ain't he preaching now?

Maybe this is blasphemous, but I liked Luther's work with Change better than his solo stuff.

"I wanna grip your hips and move." Oh snap! I didn't realize this was Tom Browne? (No way did I know the name of it either.) I only seem to associate him with "Funkin' for Jamaica."

Coming up for air after nonstop SC primary coverage to say that I pulled out my Earth Wind and Fire from 1976-1980; very early Luther and Change; found my Tom Browne (Funkin' for Jamaica); and played the Weak at the Knees from your site about 768 times.

After I watch Barack's speech again, I'm going to have an EW&F marathon for the rest of the night.

^ "Saturday Night"! I gotta whip that album out, portiapm5.

Vernon Burch- Get Up

All about the roller skating jams for me as I am more of a 70's Funkateer as much as I love Zapp,I prefer the 12 piece bands to synth Funk.

^ Did somebody say "roller skating jams"?