Lawrence Auster presents: ‘The only hope for the betterment of the black race’

On Larry Auster’s blog tonight, my favorite right-wing cyber-guru (and defender of white civilization) has posted an email from one of his many acolytes.

This reader earnestly suggests that the only hope for American blacks is “a spiritual commitment to Jesus Christ in which the Holy Spirit purges the black soul of sin and the black psyche of historical resentment.”

“The solution cannot be in the ‘horizontal’ dimension, that is, in the relationship between blacks and non-blacks, because blacks will always be behind on the level of earthly functioning, leading to unjust racial resentment on the part of blacks and undeserved racial guilt on the part of whites.

“The solution can only be found in the ‘vertical’ dimension,” he continues, “... in the relationship between each black person and God through Jesus Christ, who will put each person’s self in true order and true freedom and remove the focus on the ‘horizontal’ differences and inequalities.

“Each black person will then live and perform and fulfil himself as a human being according to his own aspirations and abilities, without comparing himself to whites.”

Now see, Fisher? You too, DeAngelo. Didn’t I say you all were wasting your time on that ouga-bouga “White Supremacy” stuff? Here is Lawrence Auster, a highly intelligent white man who wants what’s best for the blacks... he has studied the race problem long and hard, and darned if he didn’t put his finger right on a workable solution!

So why do you black-nationalist types believe that white conservatives just want to oppress and discriminate against non-white peoples? If you would only open your mind up to different... Wait a second... Hang on, Mr. Auster wasn’t finished yet.

“This is not a complete solution, however, since the overall differences between the two groups’ respective levels of abilities and collective ethnocultural identities will persist. Therefore... structural pluralism, meaning separate development in the familial, social, residential, and even educational areas of life, would probably be appropriate....”

Thank you for sharing, Mr. Auster. You prove once again that you are America’s boldest thinker! You go where sane bloggers fear to tread.

And now that I’m aware of your zeal for evangelizing the Negroes, I’ve signed you up for a one-year subscription to this: 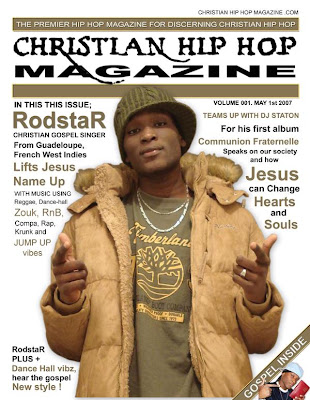 UPDATE (01/10/08): At some point after I posted this, Mr. Auster amended the title of his post to read: “The only hope for the betterment of the black race (and the white race).”
Posted by Undercover Black Man at 9:18 PM

I'm much less concerned about people such as Auster than I am about white folks who promote wanton black-on-black violence and self-destruction on HBO in accordance with a so-called "liberal" agenda. "cause at the end of the day both them white folks say the same thing about black people.

Only one of 'em is infinitely smarter.

Dave, that was funny!

I can't stop laughing at the magazine cover.

F#*# Auster and F$*# his Abrahamic religion. He is irrelavant. Most white people are not going to openly get behind his pseudo-religious racial ranting. His audience is primarily "disenfranchised" rural white trash who are mad so many black people live better than them.

In this way Fisher is right. We should be concerned with people who are far more intelligent than him in the media.

White people like him are the same dumb rednecks who burn crosses who get their orders and funding from people who sit in offices, on city councils, in congress, etc.

We need to cut off their funding. They are funded and most of these people get their funding from 4 main sources.

Auster is a moron who has never had an original thought in his life...a soldier. He is not the head.

^ Don't play Mr. Auster too cheap, Dragon Horse. He may be on the fringe, but his voice is heard on the far right when it comes to immigration and Islam.

I'm much less concerned about people such as Auster than I am about white folks who promote wanton black-on-black violence and self-destruction on HBO...

Khalid Muhammad is dead, Fisher. You don't have to pop shit to impress him.

But your response is instructive, soldier. How does an enlightened, courageous opponent of the GSWS deal tactically with the likes of Lawrence Auster?

Leave him alone? Let him sow his seeds?

Fiendishly clever of you, Fish.

1. "His audience is primarily "disenfranchised" rural white trash who are mad so many black people live better than them."

Then precisely who is oppressing whom? Do many blacks live better than rural whites?

*shrug* the reason why I'm curious is that I know a guy who works as a supervisor for the MTA in NY. Makes close to $100k, has an excellent benefits package and will retire comfortably. And yet after all this he feels, when I asked him, "oppressed".

Which is frankly astonishing to me.


2. "^ Don't play Mr. Auster too cheap, Dragon Horse. He may be on the fringe, but his voice is heard on the far right when it comes to immigration and Islam."

The only time I've ever heard his name was on your blog. And I'm pretty right wing.

Sure I've heard of Pat. Read some of his books.

IMO the only attraction that Pat holds, and this doesn't include me as I think he's a fruitcake, is that he's one of the few visible people calling for securing the borders.

Most of the visible Republicans, such as McCain or Romney, make noises about securing the borders, but nobody in the GOP actually believes them.

That they're lying out of their ass on this is a given.

What's with this horizontal and vertical crap? Huckabee uses this terminology and I've heard it's some kind of dog-whistle to evangelicals. But I have no idea what it's signaling.

Dougfp, yep "Vertical" is definately dog whistle material. It's supposedly a signal to get right with God.

Huck claims that Horizontal is a reference to left, right, liberal, conservative, Democrat, Republican politicians. He says people are looking for Vertical leadership, that will take us up not down.

Here is a link to his Vertical Day site: http://www.mikehuckabee.com/index.cfm?FuseAction=VerticalDay.Home

Frankly I'm a hardline right wing conservative. But if Huckabee is nominated by the Republicans then I'm voting for someone else.

That guy is a total fraud and little more than another Jimmy Carter. Or perhaps someone even worse than Jimmy Carter.

You haven't actually said anything with this. Several ambiguous, sarcastic sentences and poof you think you've destroyed Auster's arugment.

^ Who says I tried to destroy Auster's argument? I'm just shining a spotlight on him. His racial animus speaks for itself.

And thank you for shining that light!

A lot of dangerous movements were born in the shadows...

Does anyone even agree with Mr. Auster's famous conclusion that there are genetic disparities in IQ between blacks and whites? Because if he's right, then how are we going to solve the worldwide epidemic of racial inequality in the USA? What about in Africa? Will any of the continent's all-black governments ever grow up to become a world power? Can they do it without help?

Mr. Auster may not have much tact, but he shouldn't be written off for being radical. The world's race problems aren't going to be solved by making the white man pay restitution for all the people he dominated and oppressed. At some point, everyone needs to move on with life and either recover from the past or become victims forever. I just hope it doesn't require someone's version of "an Act of God" to get the black/white tensions to end.

Turning our minds off to all opinions which deviate from the current popular thought is a dangerous mistake that has been repeated countless times throughout history--especially when it goes so far that folks deny the evidence and just continue to espouse their comfortable old ideas. Be careful of groupthink.