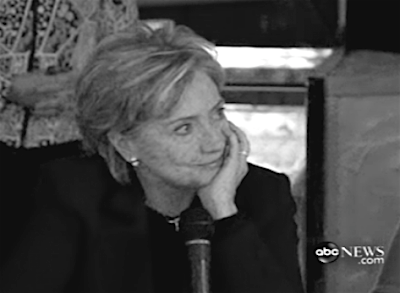 There’s a lot being said on cable news today about Hillary Clinton’s teary-eyed moment on the campaign trail.

MSNBC’s David Shuster called it a “raw, emotionally naked moment.” Various talking heads say it will help to humanize her. They say voters will like it.

Far from being an “emotionally naked” moment, that struck me as totally calculated. And it ties in to Hillary’s new strategy of calling attention to her gender.

I expect to hear Sen. Clinton say the words “passion,” “passionate” and “personal” a whole lot more in coming weeks. Until she discovers it’s a dumb-ass strategy for slowing down the Obama freight train.

Study the moment and decide for yourself:

She'd never pull that as President.

How come when she does it, it's considered a humanizing moment and when Howard Dean had his rant in '04 ("and then were going to go to South Carolina....Yeah!) it was considered a meltdown?

I don't get these pronunciations from the talking heads.

Nice post UCBM. Lies is what that is. Emotionally naked please give me a break. She can't get over how she got that butt tap by Obama and Edwards.

nice call, ubm. my mother finds hillary insincere. i find her too polarizing. and add those two observations and i tend to agree with you. she may be falling on her sword. she better hope some skeletons come out of barack's closet. and in this case, an illegitimate black child prolly won't be enough to sink his battleship.

Just saw this a couple of minutes ago on the ABC/Facebook platform.

She has been in politics for quite some time and should be able to come up with a better strategy than crocodile tears.

I'm don't like her as the best Democratic candidate. I'll take her over the Republican field though.

The Clintons are brilliant political strategists. Ruthless, too.

I know we're all human and cry when it hurts. But she's too strong a woman to let the public see her do that without it being a calculated moment.

I still think she's gonna lay a can of whup-ass on Barack once the primaries hit the big states. Oprah's tv show's gonna have to be a continuous Barack ad afterwards.

Turning on the tears just plays into the hands of the people who think women are too emotional/hormonal to be POTUS. I imagine the only other time Hil got sobby over a "butt tap" was when she was born.

Just so we're not confused. Kucinich is my guy.

Tears and contrivances aside, it would have been nice to see the softer spoken Hillary every now and then if only to round out her character. Bringing that out only right now makes it looks like what it is... a desperate measure.

However she did kinda look pretty for a second there.

Looks like it'll be another crappy vote for me: whoever isn't the Republican candidate (esp. if it's Huckabee) :(

Neptune: "I imagine the only other time Hil got sobby over a 'butt tap' was when she was born."

DeAngelo: "I know we're all human and cry when it hurts. But she's too strong a woman to let the public see her do that without it being a calculated moment."

Absolutely. And the timing is fishy. Plus the fact it was done at an event for undecided women voters.

No doubt some Clinton campaign insider will write a tell-all book about the race (might be typing up the proposal right now), so we might learn the truth about the teary-eyed moment one day.

justjudith: "she better hope some skeletons come out of barack's closet."

Well, judith, you know what Hillary says... it ain't about sitting around hoping. It's about action.

Be afraid. Be very afraid.

Actually, I've been thinking about the politics of personal destruction, and wondering how nasty it might get. I'm starting to think that Team Clinton might not go there... because if they throw some mud on him that ultimately keeps a Democrat out of the White House, the party will never forgive them.

Bill has the ability to make the most calculating utterances look perfectly natural. Hillary's most unguarded moments come off as calculating. (She could be having an orgasm, and you'd wonder "What's her angle?")

Although I'd prefer to vote Republican, I'll vote for Obama over Huckabee. Obama may be full of insubstantial platitudes, but they're optimistic platitudes, and he's unlikely to be able to push through a lot of legislation or policy I'd object to.

We're in trouble if Democrats start looking beyond the (R) after Huckabee's name. He'll give them more of what they want than most of the Democratic field.

I am a democrate, who had not made up my mind, but with Obama as the democrate front runner I will vote republican no matter who the main dog is. The glass ceiling is alive and well against woman and the democrates would rather put a black man in as president without any issues than a woman with experience. That makes a lot of the same George Bush sense. I do not want to finish this country off while Obama talks nice to the radicals. The rock star wants to engage the people so that when everything fails he has someone to blame to escape any responsibility. Did this country not learn the lessons of inexperience with George Bush as he has ruined this country in the last seven years? Obama is a kid, who needs experience before changing all of our lives and a few well crafted sound bites and speeches does not cover it.

Actually, I've been thinking about the politics of personal destruction, and wondering how nasty it might get.

I'm starting to think if Obama continues to gain momentum, Hillary might pull out all the stops with: "Obama whistled at me."

^ Oh! We need to start a comedy show!

100% agreed with your original post, and the comment on the Clinton camp on thin ice about trying something with Obama.

I used to love The Hill, now I just feel sorry for her.

Somewhere I remember the DNC practically handing Senator Clinton the nomination and being luke warm to this little upstart Senator from Illinois, that is until a few of the Clinton big donors jumped ship, and then things started getting interesting.

I think the Clintons are more stunned about Obama's lead than they would be if it was Edwards. Even with being the darlings of the DNC, I don't know why they didn't see this electorate thing coming.

Too bad Barbara Jordan isn't with us anymore.

I have been watching Hillary attack Barack for quite some time. She and Edwards were awful chummy right up until Obama had that dubious win in Iowa. Suddenly he decided to jump to Obama's side and Hillary cries "the guys attacked me" and sobs about how tired she is and doing it all for us. It did swing votes her way~from guys too, from comments I read on the web.

If she is feeling this emotional and stressed during campaigning how ever will she hold up under real pressure? She has it easy compared to Barack who has had death threats, racist attacks by KKK types, has to prove to Blacks he's black enough and prove to white's he is not a Muslim terrorist, nor pays favortism to blacks.

If anyone should be breaking down it is him. If I were him I would throw in the towel and say F-you all.

But he still has class; if I were dealing with her I doubt I could be that gracious. She also shed no ears for innocent dead children killed in Iraq. What a gal.