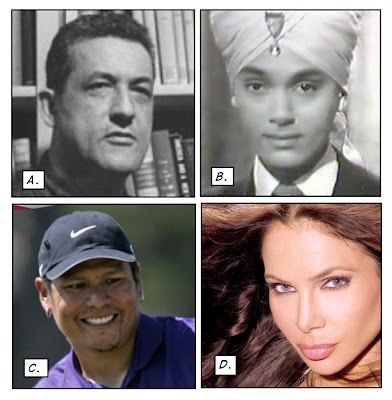 It’s been a while since we played this game. Here’s how it works:

The first person to correctly identify the above four persons, A thru D, as either Negro or not a Negro will win a prize. That prize is a brand new copy of the 2007 paperback “The Early Black History Movement, Carter G. Woodson, and Lorenzo Johnston Greene.”

Mr. Woodson is the man who created Negro History Week, which we now know as Black History Month.

Only one set of guesses allowed per person. You don’t have to tell me who the people are. Just “Negro” or “Not a Negro.” Put your guesses in the comment thread. Good luck!

UPDATE (01/24/08): We have a winner. Genevagirl, hit me with an email at the address on my profile page to claim your prize.

A. is Lawrence Dennis, a political writer who passed as white during his adult life, but who first gained attention as a mulatto “child preacher.” Dennis is the subject of a 2006 biography, “The Color of Fascism: Lawrence Dennis, Racial Passing, and the Rise of Right-Wing Extremism in the United States.” I’ll write more about him during Black History Month.

B. is Korla Pandit (born John Roland Redd), an organist and early television personality in Los Angeles. He claimed to have been born in New Delhi, but magazine journalist RJ Smith discovered the truth in recent years; “Korla Pandit” was actually born in St. Louis. Both of his parents were Negroes. Interestingly, when John Redd first moved to L.A., he tried passing as Mexican (under the name “Juan Rolando”).

Thanks for playing!
Posted by Undercover Black Man at 6:00 PM

I don't know about the other folks, but if that's Hadji from Jonny Quest in B, he's an honorary Negro whether he's a Negro or not. Coolest cartoon character ever!

Much as I'd like Hadji to be a Negro, I'd say A is a negro, everybody is simply colorful or a has a bad collagen job.

I have no real idea who A is, but if it's by any chance John Howard Griffin, he was not a Negro, even though he wrote _Black Like Me_. B is Korla Pandit, who was said to be from India but was probably from Arizona, and not African-American. C is Vijay Singh, who is dark but definitely not African-American. D is...somebody. Since she's not the obvious choice, she must be African-American.

One more thing: one of the times you do this you might include a picture of Walter Francis White.

Thank you for recognizing Korla Pandit. It's been bugging me since the post went up. And I agree with your breakdown, though I too have no idea who A is.

Not
Not
Yes
Yes

C - Vijay Singh - Fijian, although in a NY Times magazine article he said that he was a black man. Liked him ever since.

D - No idea, something else

Now for a bonus round let's play Chinese, Not Chinese!

I say none of the above.


This ought to be a Jeopardy category. Can't you imagine Tiger Wood's picture coming up and the contestants being dumbfounded. Lol

I was wondering when you would do this again!

Genevagirl is the winner... even though C. is not Vijay Singh. I'll post the answers on the main page.

When I saw "A" for a hot second I thought about Anatole Broyard, a critic for the New York Times. His daughter Bliss Broyard recently wrote about his life in One Drop: My Father's Hidden Life--A Story of Race & Family Secrets.

If you go to this video and skip ahead to 8:09, you can catch an old clip of Korla and then a modern glimpse with him speaking.

And how do you know that these person's parents were or were not "Negroes"?

Very interesting game, because it goes right to the heart of racism.

There is no such thing biologically speaking.

Somebody invented the whole concept.

(b) More importantly, what does the concept do?

Congratulations, Fisher... you win the bigger game. "Negro, Not a Negro" is all about a kind of absurdity. We could spend the rest of our lives dissecting the meaning of it.

One of my all time favorite books is "Life on the Color Line : The True Story of a White Boy Who Discovered He Was Black."

He was a guest speaker for a class I took a few years ago. A white female student asked, "What do you consider yourself?" And he answered: "African American."

I'ma cop that book though.

That pic proves the point. "White" is biologically just as absurd as "black".

Which of these two siblings is "white" and which one is "black"?

Okay, Fisher, let me put you on the spot now: If "white" is just as absurd as "black," why you give a hard time to black women who encourage other black women to date and mate with white men?

(I know you're ready with the answer.)

"Okay, Fisher, let me put you on the spot now: If "white" is just as absurd as "black," why you give a hard time to black women who encourage other black women to date and mate with white men?"

Damn. I only get 25% right and I can't tell the difference between Vijay Singh and Notah Begay. Glad I didn't put money on it.

Now hear his, David. Let me put you on the spot.

Given that "race", that is, "black" or "white" is a biological absurdity, how do you account for the "biological" basis of "black" IQ levels?

^ Well, Michael, I didn't say race is a biological absurdity... you did.

I'm open to the notion that different human subgroups underwent different genomic adaptations over the course of thousands of years.

The "absurdity" I alluded to above is not the concept that race is a biological reality. The absurdity is all of our cultural hang-ups and personal head trips about it.

"I'm open to the notion that different human subgroups underwent different genomic adaptations over the course of thousands of years."

Why don't you give me the objective biological characteristics of the "black race"?

Look, I'm no deep student of genomic science. And I'm not eager to argue with you on this point when we both would probably agree that it's the cultural components of "race" that are the ass-kicker.

That is not to deny the history-shaping significance of race as cultural construct.

Both things can be true: Race can be a biological reality and (separately) a manufactured cultural system.

The best way to illustrate my point is, let's look at sex. Women and men are different... chromosomally and chemically. Sex difference is a biological reality. And it may manifest in ways that are socially significant (proneness to violence and aggression, for example).

But manufactured cultural systems built around gender -- such as traditional Muslim restrictions on the activities of women and girls -- are worth studying and debating on their own terms, quite apart from the issue of the biological reality. (Though biology tends to get dragged into the cultural discussion, be it about gender or race.)

I don't build my politics upon biological determinism. But I'd like to understand why your politics is built upon a belief that race is a biological fiction? Why is it important to believe that, in terms of the cultural debate?

Is that so? Then you ought to be able to tell us which markers within their DNA tell you that.

What DNA markers make Finns a separate race from the Inuit from the Masai?

Sex difference is a biological reality.

No shit, Sherlock. So do if you wanna equate race with sex, do we have two races of humans? A female race and a male race?

Why yes? Why not?

And it may manifest in ways that are socially significant (proneness to violence and aggression, for example).

Why would you argue that the female race is more prone to violence than the male race? That is what you meant to say, yes?

I don't build my politics upon biological determinism.

Except when it comes to IQ?

But I'd like to understand why your politics is built upon a belief that race is a biological fiction?

It's not a belief, it is a fact. It's not even logical. Why base "race" on skin color?

Even if you did, what skin color?

Even if you could identify a skin color, what shade?

Where would your race begin and where would it end?

Why skin color? Why not the diameter of peoples' anuses?

What biological characteristic are you using as an objective non-"cultural" marker?

I've asked you several times, David. What makes you "black"?

"Why is it important to believe that, in terms of the cultural debate?"

I don't believe nothing. I see. And what I see is a socio-political invention.

Now, since there is no such thing as a biological "race", then any dysfunctions, "lack of intelligence", or any such goodies attributed to a socio-political group can not possibly be a function of biology.

If you wanna cut evil mofo like Jared Taylor off at their knees, just ask them to define "race" on an objective basis.

He'll spout so much words that you'll drown and still will have said nothing.

Nonetheless, in real life we see these dysfunctions and IQ test gaps and various pathologies prominent among these groups of people which have been determined to be a "race".

But if the source of the dysfunctions can't possibly be biological, then the source must be socio-political.

Every human being lives in a socio-political system, and most of these systems have elites which elites usually stay elites why? Because of biology?

But if there is no biological basis for social stratification, it lay elsewhere. Where would that be?

Think about it based on logic, David, and come back with an answer unassailable by logic.

"But if there is no biological basis for social stratification, it lay elsewhere. Where would that be?

Think about it based on logic, David, and come back with an answer unassailable by logic."

^ I got no fight in me, Michael. Not right now. Sorry to disappoint. We will have to revisit this later.

no problem. Maybe you should quit visiting Satan's lair? ;)