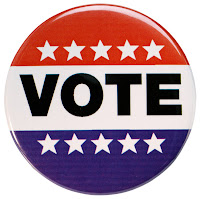 At 2 a.m. this morning, I heard my first 2008 campaign ad on the radio. It was from fringe Republican Ron Paul, going negative on all four of his GOP opponents at once.

Already I was hyped about February 5. But it hadn’t dawned on me that California (as well as New York, Alabama, Georgia, Illinois, Minnesota, Arizona, Colorado, Kansas, and the rest of the Super Tuesday states)... we’re in for a week of intense campaign advertising.

Like watching storm clouds roll in, I’m anticipating the thunder and lightning. It’s thrilling.
Posted by Undercover Black Man at 9:49 AM

Screw the stupid campaign ads! I hain't got time for that nonsense. I'm gonna DVR everything I watch just to avoid 'em all :-D

Saw my first Hillary commercial this morning, on ENERGY POLICY, of all things.

^ Bring 'em on! Let's see how they're spending our money.

I'm in Cali and this is gonna be good. I'm rubbing my hands in gleee in anticipation. Can't wait to see what jumps off.

Hillary's got tv ads here in Missouri that started this week and Obama has radio ads going.

We have officially embarked upon the "SS 2008 Elections". Keep your hand and feet inside please.

^ And let's all kick a few ducats to the candidate of our choice, why don't we? It's as easy as buying a book from Amazon.

Own a piece of the rock!

Hey, I've laid out a couple hundred to Obama already. In fact, he owes me a sweatshirt.

^ I didn't know they were selling shirts, Wanda. Oh wow... those are gonna go quick. They won't be able to make enough of those.

Yea, they've got a backlog already of about 3-6 weeks. Now that I think about it, by the time the sweatshirt comes, I'll need a tshirt.