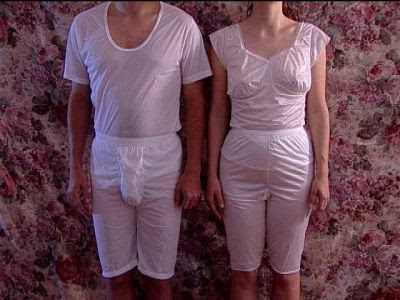 Last week I cracked a joke about “magic underwear” in regard to Mitt Romney’s father, George W. Romney, himself a former Republican candidate for president.

I have no beef with the Mormons. But I am intrigued by their underwear. Other bloggers are too.

In late 2006, Wonkette wrote that Mitt Romney “refus[es] to say whether or not he wears the magic Mormon underwear.”

Wonkette was probably referring to an Atlantic Monthly article, in which Sridhar Pappu asked Mitt flat out: “Do you wear the temple garments?” Gov. Romney replied: “I’ll just say those sorts of things I’ll keep private.”

Gay conservative Andrew Sullivan posted a photo of the sacred drawers, prompting this response from Daniel Pulliam, a religion blogger:

“[T]his underwear issue should be dropped. ... I wonder why Sullivan has never asked whether the next Senate Majority Leader, Harry Reid, wears Mormon undergarments? Or Sen. Orrin Hatch? ...

“If a reporter had 10 questions to ask Romney, one should not be asking about what he is wearing underneath his suit. ... Leave the undergarment questions for ‘The Daily Show’ and ‘The Colbert Report.’”

Well... how did Mitt Romney’s father handle this underwear issue 40 years ago, when Mormonism no doubt was considered even more weird than it is today?

Let’s consult a 1967 biography, “Romney’s Way – A Man and An Idea,” written by magazine journalist T. George Harris. The following comes from a chapter titled “A Missionary’s Long Underwear”:

T. GEORGE HARRIS: The Governor of Michigan wears peculiar drawers. They are the kind of long johns that Mormons call “temple garments.” He earned the right to them when he was 19, and put them on at a ceremony in Salt Lake’s home temple of the Church of Jesus Christ of the Latter-day Saints. He does not buy any other kind of underwear.

Should he smoke, drink or give less than ten percent of his gross income to his church, he would by his lights forfeit the privilege. They are sort of holy BVD’s, a cynic would say, for they have stitched marks across the front copied from symbols used in LDS temple oaths.

These signs on fresh-laundered underclothes remind him that his muscular body is a tabernacle of God and that his actions and motives will one day be judged by a court that has all the evidence. The real significance of those garments, however, takes a second thought: His personal religion, worn next to the skin, is as plain and serviceable as cotton knit. ...

[N]ot yet well educated on [George] Romney, I imagined that he would hunt a theological excuse for a less distinctive fashion, say boxer shorts. Visual symbols have always been dangerous in Presidential campaigns, especially if they somehow sum up the man.

Among the disparaging symbols recently hung on campaigners – from Tom Dewey’s “little man on top of a wedding cake” to Richard Nixon’s dog Checkers, Adlai Stevenson’s old shoe and Lyndon Johnson’s wheeler-dealer Stetson – none has invited ridicule like a pair of saintly long johns.

Romney knew this. Democrats were already tagging him Batman to deride his earnest manner. They sure would wave the drawers. But when I happened to learn that he had not given up the garments, he simply tried to make me understand why.

“You saw me receive an honorary doctorate the other day, another degree [he had 17] that I did not earn,” he said. “But people are proud to wear the robes for degrees they earn. Though not visible, the garments are something I earned by living up to certain standards.”

Posted by Undercover Black Man at 10:19 AM

I have it on good authority that Willard wears no underwear at all. However, if we think about his complete reinvention of himself and his effort to run from his own past record and actions that makes perfect sense.

Find out what they are before the DIM's tell you all about it;

Candidate Research - Know Who You're Voting For ( The Easy Way ) http://tinyurl.com/2sowta

Quick answer from a Mormon--yes, I'm sure Mitt wears the underwear known as "sacred garments" or more commonly just "garments" by people of the LDS faith.

Mitt doesn't comment on them for at least two reasons:

1. They're irrelevant to his campaign for President of the United States and any mention of them would be a meaningless distraction from real issues relevant to the current situation.

The only possible relevancy you could draw from whether or not he wears them is to say "If he is really living his faith then he wears them, and if he isn't, then he doesn't, and do we want to elect someone who claims to live his faith but doesn't?" But there are other, better ways to know whether someone lives their faith. Just because a Jew wears a kippah doesn't mean they're living 100%, and just because a Mormon wears a garment doesn't mean they're 100% either.

2. The garment is sacred (i.e. special, important, highly meaningful, etc.) and nobody likes to open up what is sacred to them to public ridicule. The fact that Romney is running brings it into the public realm, but if he were to actually comment on it then that would only exacerbate the situation. I don't know what analogy to draw, but if you can imagine whatever it is that other religions hold sacred and revere and then imagine a way to denigrate and make fun of it, then that's what it's like when the garments are talked about and photos of them are displayed on websites. It's highly offensive to any Mormon who wears them, perhaps in the same way it would be if you found out someone were a vegetarian and then said "Well, let's look at photos of a slaughterhouse, shall we?" just to get their ire up.

I recognize most people are ignorant of how much the garment means to Mormons so I don't get offended about it, I just try and explain as best I can about it and then it's up to them whether they want to be respectful of our beliefs or not.

There is nothing magical or secret about the Mormon undergarment. It's not secret, it's SACRET. Why are you still lingering on their Temple undergarments for? Is wearing this garment disqualify Mitt? Do you call the Catholics and other churches cannibals because through symbolism they eat the body and drink the blood of Jesus in their sacraments? Your question is not to bring understanding and harmony, but a part of the everyday attack on the Mormon Church. Your ignorant, shallow knowledge will never take anywhere. You’ve already surrounded your self with walls of ignorance and blocks heaven with your head stuck in where the sun doesn’t shine. Get out from bondage and stop throwing stones before you hurt yourself. What you sow is what you’ll reap. Climb the tree of knowledge and you will have a broader view.

I am still wondering what Mitt was thinking prior to 1978 when Mormon doctrine toward Black people changed.

Before 1978 Mormon doctrine said that we were Satan’s representatives on earth.

So did Mitt follow doctrine or did he have a mind of his own?

actually, the mormons believe that black people are "marked" as black because they choose to be neutral in the battle between lucifer and god. of course, the people in god's army are blonde hair and blue eyed.