Before I fell out of touch with American youth culture (around 1994), I watched a good bit of MTV.

Yep, I was digging Duffy and “Beavis & Butt-head” and “Liquid Television” and the first few seasons of “The Real World.”

But Kennedy? Uhh... I never really got Kennedy. 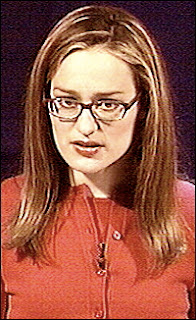 Anyways, Kennedy turned up last Thursday and Friday night on my favorite talk-radio station, KFI in Los Angeles. She hosted the 7-to-10 p.m. shift, serving as one of many fill-ins since John Ziegler got shitcanned a few weeks ago.

And Kennedy was pretty painful.

Does she think she’s clever? Entertaining? Got important things to say? Or does Kennedy realize just how lucky she is to have any kind of broadcasting career at all?

Click here to listen to 7 minutes of Kennedy’s witless jabbering from last Thursday evening. Her subject was Oprah Winfrey’s support of Barack Obama, but somehow she managed to blithely demean the Holocaust.

Hey, I got no problem with a woman earning money to feed her kid. But Kennedy represents – and evidently always will – MTV’s dumbing-down of American youth culture.
Posted by Undercover Black Man at 1:08 PM

Can't vouch for this source, but I seem to recall she was fairly right-wing. And these guys claim she is Republican with libertarian tendencies. http://www.theadvocates.org/celebrities/kennedy.html

Thanks for commenting, Christopher.

It's not her libertarianism or Republican status that bothers me. It's her lack of anything interesting to say.

What a doorknob she is.

So, did you read the Malcolm Gladwell article on intelligence and race in the New Yorker?

(Watch as I fail to be afraid of raising the topic!)

(Kennedy may be proof of a parallel and proportional relationship between melanin and intelligence.)

Okay, so now I'm embarrassed that I posted without listening to all of the audio, including the part where she says what I wrote word for word!

But it mostly just seems forced.

Reminds me of some poor classroom teaching I've encountered. Solid but irrelevant facts poured into random long digressions, with the endless flow of words meant to (but failing to) conceal a lack of focus.

She was dumb/boring on MTV and she remains consistent.

We used to joke that her republicanism was the only way she could rebel against her parents who saddled her with that moniker.

There isn't a hell of alot that comes out of MTV that isn't part of the dumbing down of America. Kennedy was never a tenth as clever as she thought she was.

My boy, in high school and junior high used to think she was hot :-O

I think she had naked pics floating around the net and now she is Republican.

She probably got mugged by a minority.

Okay, I liked Kennedy, especially when she threw a party for herself and told everyone to fuck off after Rolling Stone voted her worst MTV VJ.

But I'm sorry, I may be a liberal so I'm biased, but comparing Obama's endorsement by Oprah to Sophie's Choice is... it feels CRUEL to me for some reason.

^ Indeed. Thoughtlessly cruel. Particularly how she tossed off the word "gassed." (At least that's what bugged me.)