MBP of the Week: SI.com/CNN 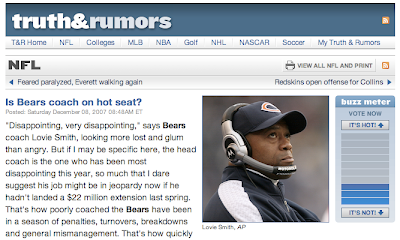 When it comes to the media phenomenon of Misidentified Black People, I am nothing without you, dear readers.

So I thank Calvin for alerting me to an MBP on a website called FanNation.com – a joint venture of Sports Illustrated and CNN.

They fixed it now. But earlier today, if you had clicked on the link above, you would’ve seen a photograph wrongly identified as Lovie Smith, the Chicago Bears head coach.

“I'm pretty sure that the picture on this story... is not a picture of Lovie Smith,” Calvin wrote in an email... but he didn’t know who it was.

Likewise, commenters at FanNation wrote: “Is that even a picture of Lovie Smith?!” “This Pic is not even Lovie.” “THAT ISN'T LOVIE SMITH IN THE PICTURE!!!!” But no one revealed who it was.

One fellow wrote: “If not mistaken that guy is Pep Hamilton QB coach.”

Well, the Bears have quite a few black assistants... but no, the man in the picture wasn’t quarterbacks coach Pep Hamilton.

It was Tim Spencer, the running backs coach.

Below I present a similar shot of Mr. Spencer (on the right), plus a photo of Lovie Smith for comparison’s sake. 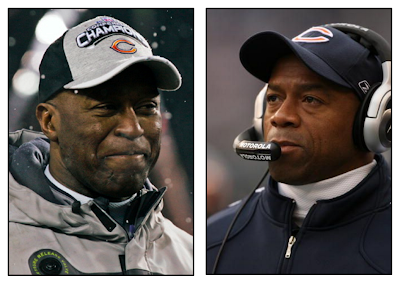 From a Little Green Footballs reader.

Thank you for your crushing take down of Lawrence Auster. Very well done.

So he's not who we thought he was?

Your work was well noted behind the scenes and the ammo was not wasted.

These MBPs are a trip. Keep 'em coming, tho'.

glad to see the MBPs are back in full force... i was a bit worried about the slim pickings we had there for a while (or is that just progress?)

With your help -- and the help of all eagle-eyed readers, Bklyn6 -- I intend to.

i was a bit worried about the slim pickings we had there for a while...

Me too, C&R. When it's off-season for basketball and football, it's a dry season indeed for MBPs.

Your work was well noted behind the scenes and the ammo was not wasted.

Dang, R... If you think Larry Auster's got a Jewish problem, you didn't get it from anything I wrote.

But he's a big boy. He can handle himself.

I know that's not the only mental issue he's got rattling around inside his twisted head.

But it was the one that worked for me at the time and in the place.

It's been my experience that both mental issues can often be found in the same head.

If they've got a color problem, they usually have a Jew problem as well, and vice versa.