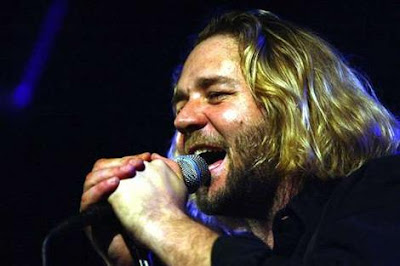 I am ready to see some “American Gangster,” y’all... even though there’s a black economic boycott happening today (for which I never got the memo).

I’m not expecting cinematic greatness from “American Gangster.” Some good acting and I’ll be satisfied.

And just to show you I’m not all about Denzel, let’s talk about Russell Crowe and his other career – rock-’n’-roll STUD! Yes, I refer to his band, 30 Odd Foot of Grunts.

While I’m at it, let’s talk about some other fantasy-league rockers from the Screen Actors Guild. Click the song titles below to hear their non-singin’ asses.

(Shall we have a vote in the comments section as to which of these four stars you’d rather hear perform a full set?)

Yes, Russell Crowe commits murder upon this Johnny Cash classic... in concert. What chaps my hide, though, is his pre-song banter. (Yeah, Russ, you fucking prat... pleeease sing us one more song!)

UPDATE (11/02/07): I may talk shit about his singing, but Russell Crowe is a baaad mutha when a motion-picture camera is aimed in his direction. He rocks “American Gangster.”

Denzel is cool and all... but there’s just not enough truth and humanity for him to dig into with this role as written. Matter of fact, in race-war terms, the white actors out-acted the black actors up and down the line... with the exception of one great piece of acting by Ruby Dee.

Cuba Gooding, Jr., played dress-up. Chiwetel Ejiofor was given nothing to do. Joe Morton... put to waste.

The song was made famous by Harry Nilsson and the movie “Midnight Cowboy.” I bet you cannot sit through Billy Bob’s version from start to finish. 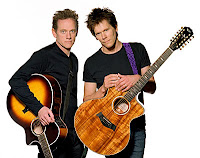 Kevin Bacon and his brother Michael render this Tom Waits tune as a duet. Michael takes the first verse, Kevin the second.

How do I know it’s Michael singing first? Because Michael Bacon can sing. Listen to the difference. He sits in the melody like an easy chair, the story just rolling off his tongue. Then Kevin comes in and he’s pushing and forcing and acting like he’s singing a song... instead of just singing the song.

(If you’re gonna vote in the comments sections, I’m talking about Kevin Bacon solo, not with his brother.)

Painful, yes... but he gets my vote. If I had to watch one of these guys play a full set, it would be Belushi. At least I could squint and make believe it was John.
Posted by Undercover Black Man at 11:49 AM

The painful truth is, not one of these guys would get any sort of recording contract without the built-in name recognition. Russell Crowe is simply awful, and the others aren't much better. Bacon's brother can sing a bit, but without Kevin, he'd be playing Rusty's Surf Ranch.

Another "star" who sings is Juliette Lewis. Haven't heard her but apparently she does some kind of Iggy-Stooges-MC5 thing.

MY EARS ARE BLEEDING!!!! Shame on you for subjecting the public to these horrors!

How about Eddie Murphy? Non-singin' or singin'?

I actually remember when Cindy Herron from En Vogue was an actress. (Can't remember the name of the show, but her brother was played by Wolf Perry.) I guess her singing career was more successful than her acting career.

another great post, ubm. and jena6 has a great point -- eddie murphy has a whole collection of terrible tunes. cindy herron was also in juice, i think.

Boy that shit was terrible. I couldn't make it through ANY of them. No one gets my vote. I'd rather sit at home listening to (insert musical artist you hate most here) than these buffoons.

The Bacon brothers went to my middle school, and as a joke a kid wrote all of these fan letters to them and asked them to play at the school. They did, but I had graduated by then. The Bacons get my vote out of sheer Philly-ness.

Cindy Herron was also in Juice... Do the attempts at singing careers made by Tisha Campbell and Jasmine Guy count?

Didn't BRUCE WILLIS have a band once?

I actually remember when Cindy Herron from En Vogue was an actress. (Can't remember the name of the show, but her brother was played by Wolf Perry.)

Jena6, I remember that show vividly. But I had to look up the title... "Up and Coming." Larry Fishburne was in one episode of that show.

I watched all those public-TV dramatic sitcoms that were out back then... Remember Joe Morton in "Watch Your Mouth" (killer Sarah Dash theme song)?

Mykelti Williamson in "The Righteous Apples"?

Jena6, the Huey Lewis/Paltrow duet takes place in a movie called, eh, Duets and is also on the accompanying soundtrack... While I understand that knowing this proves I'm a horrible person my defense is that this is yet another glorious tidbit I've picked up from work...

Thembi: I'll cut Tisha and Jasmine a lot of slack. There's something particularly male about indulging the rock-'n'-roll fantasy just because you got famous doing something else.

Add Don Johnson to that list. (Philip Michael Thomas too, for that matter.) And every NBA star who tried to rap.

Mykelti Williamson in "The Righteous Apples"?

UBM, you took the words right out of my mouth. I also thought of Sarah Dash and the theme song from "Watch Your Mouth:" There's work to be done, find your direction, you are on your way....For the love of you, you know what to do.... Or something like that. (I remember "Righteous Apples", too!)

(Philip Michael Thomas too, for that matter.)

Missed that. "Just the Way I Planned It." I can still see the video; he was all shirtless, and whatnot. It's probably on youtube.

well we can't leave Jada out of the mix either. I've never heard Wicked Wisdom, but it's hard to take someone seriously when one day they are divaglam and rockthug the next.

One thing I noticed is that in all of these selections the singer is the only weak link. I don't mean that the backing is always great art, but it is always of a very high competence--in a word, professional. The music and production are crafted by skilled and well-trained practitioners. Which means that a certain portion of that money earned on-screen is being spent here on solid work, but only in order to burnish a vanity project.

You know who else would fit in this category now? Britney Spears. Every piece I've read about her new album points out that everything about it is very well done with the exception of her vocal tracks. Her singing is sparser than on her previous albums and obviously required a lot of technical massaging. And that's sadder than Russell Crowe's efforts.

At the very least, Keanu Reeves should be commended for strumming his bass and shutting the hell up when he was in Dogstar.

I watched about a half hour of a bootleg of American Gangster at a friend's house last night, I went home because I was tired, but... wow, you were right about Denzel. Who is Frank Lucas? I have no idea. There seems to be something so... stolid about his performance that it's disappointing. The rest of the movie felt awfully perfunctory.

Add Don Johnson to that list. (Philip Michael Thomas too, for that matter.) And every NBA star who tried to rap.

Jena6 wrote: "I also thought of Sarah Dash and the theme song from 'Watch Your Mouth: There's work to be done, find your direction, you are on your way....For the love of you, you know what to do...."

I would give anything to have an MP3 of this track.

(Shall we have a vote in the comments section as to which of these four stars you’d rather hear perform a full set?)

I've actually been to see TOFOG perform live. Didn't meet Russ Le Roq himself, but I did meet some of his mates and they were lovely blokes. Good musicians, too!

^ All I'll say about Russell is that he's very sincere in his love of the rock and/or roll. His band is *very* good, however. Songs are mostly um, how you say, dreck?