Satan wants to sex you up. 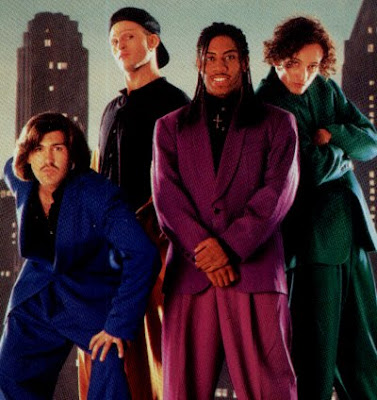 Ever wonder what happened to the guys in Color Me Badd?

By the time Color Me Badd was making hit records, I was way past done with contemporary “R&B.” And I didn’t watch a lot of MTV. So even today, I couldn’t hum “I Wanna Sex You Up” for you on a bet.

You young’uns in your thirties probably feel differently about ’em. Probably have a nice memory or two associated with Color Me Badd.

Hey... did you hear that one of them dudes went through an EXORCISM a few years back because he was DEMONICALLY POSSESSED and shit??

No joke. It was the black one... Kevin Thornton.

I even heard a sound bite from the actual exorcism on the radio, on George Noory’s “Coast to Coast” program. (Love that late-night weirdness!)

George’s guest Monday night was Bob Larson (pictured left), a traveling Christian evangelist (and aspiring Just For Men spokesmodel) who claims to have performed thousands of exorcisms. Thousands! Including an exorcism on Mr. Thornton (or “KT,” as Color Me Badd fans used to know him).

Pastor Larson was nice enough to provide audio clips from a few of his exorcisms. So I’m streaming a 2-minute slice of “Coast to Coast” with the Kevin Thornton exorcism included. Click here. And then tell a friend. Because this is flippin’ bizarre!!
Posted by Undercover Black Man at 7:22 PM

Never has anyone beat me to the punch with such obscure and thoroughly researched nonsense.
I commend you.

You'd think a demon would try to hook up with someone a little more fun...maybe Jerome Benton from the Time.

I remember when my brother, who was 12 at the time, rented New Jack City and my mom freaked over hearing "I wanna sex you up!"

Bob Larson featured in this episode of the Australian TV series "John Safran vs. God"

Very creepy. I still think Safran was faking it mostly just to mess with his audience, but Larson is still nuts.

Now, how did I know it would be "the black one" callin' on an exorcist? Shoulda called on a psychic to find out what happened to his music career.

Think I know where you were going, doctor memory. :-)

Sam Watters (Kenny G look a like) is married to Tamyra Gray (from American Idol).

yeah, and Watters has done pretty well in recent years, producing hits for the likes of Anastasia and Fantasia (hey, dat rhymes!)

i guess those of us who watched VH1's Mission Man Band know what lead singer Bryan Abrams has been up to...

@jena6: could he look anymore angry he was getting married? lol.

ok, i just listened to the clip and i had to come back and say: W.T.F.?

Who knew that demons had legal rights?

could he look anymore angry he was getting married? lol.

"Legal rights?" Word? I can't get down with demonic possession (never saw "The Exorcist"), but maybe I'll listen to the exorcism.

OH MY!!! Bizarre is the thought that comes to mind. Whoa! (Joey from "Blossom" impression)

Okay. I listened. Then I just had to know why the demon had to hold an LL.M?

See: Battle Prayer to Break Legal Rights of Demons". It says: "Demons will move in for an attack once they see a person committing a door-opening, hedge-breaking sin and transgression against the Lord." Here's a list of offences:

1. The occult
2. False religions and cults
3. Any part of the New Age Movement
4. The homosexual lifestyle
5. Any type of Satan worshipping group [Color me Badd?]
6. Any involvement with abortion or the abortion industry
7. Abusing alcohol
8. Doing any type of drugs - including pot
9. Any type of extreme verbal and/or physical abuse on your mate or children
10. Any type of promiscuous sexual lifestyle
11. Any type of criminal activity
12. Murder
13. Bringing a cursed object into your home

^ Splendid research. I was thinking about No. 4 in this case, before I even knew there was a list...

I have no problem with number 13.
If those beads on his braids are not cursed objects I don't know what are.

Ooooooh! "The Exorcist" I love that scary shit, but maybe these mf's are just bad. I guess the fact that they went to hell means Satan ain't commercial. Pass the doobie Jena6; or is that 666...

BTW, UBM you are definitely a trip. " He is miiiine." ch

If you are ever around the Vatican Library check out the history of exorcism there, mostly in Latin though. People have been casting out devils for about 4000 years, maybe much longer. Shamans and Jesuits have all been in on the action. But in the past the idea was mostly that the devil was in the insane person, later it was the religiously incorrect person and today in the US it seems to be potentially anyone who has a problem with fundamentalism.
What can't be denied is that if one believes in the Biblical God, then one believes in the Devil and the demons. That's a big reason why I am an agnostic or at least not that impressed by the Bible.
But casting out the demons is certainly entertaining.
On the other hand, I know a lot of Haitians who are good at summoning the deities and the demons.
I propose a little contest between
this Exorcisor and any old Voudoun practitioner.
My money is on the latter.

wow, david, you find the most interesting stuff. thembi: excellent comments. ok, is it wrong to laugh at a demon? 'cause as soon as he started growling i couldn't stop laughing. and i'm with schottzie03 -- can somebody a little more interesting get a demon? maybe the asian girl from soul train?? or that tall dude with the hat from back in the day.

Not the Asian girl from Soul Train!!

^yeah, girl. wouldn't it be fascinating to find out that she had a demon?? i think that would be highly entertaining. if only we could pick who has a demon.