I stumbled upon a classic American folk song earlier this year... one I’d never heard of before.

This tune – under the variant title “Run, Boy, Run” – is an old-time country music standard. It has been recorded by famous fiddlers such as Eck Robertson and Earl Collins, and by banjo-pluckers like Uncle Dave Macon and Jim Smoak.

But those were instrumental versions. You can click here and sample Fiddlin’ Eck Robertson’s rendition from the 1920s, streaming on my Vox audio stash. 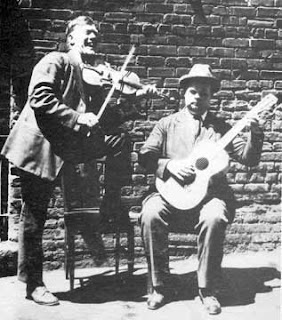 Now, ready for a version with lyrics? Click here for “Run, Nigger, Run” as recorded in 1927 by the Skillet Lickers (pictured). Again, I’ll wait.

Oh, I wish I could see your face right now. In case you couldn’t make out the words, he’s saying:

Just so you know, the Skillet Lickers were NOT the house band for the Ku Klux Klan. They were a popular and influential group that recorded this song (and more than 100 others) for Columbia Records!

Also, they didn’t write it. “Run, Nigger, Run” was already a part of Southern folklore. Click here to listen to a verse recited by a white woman in Tennessee, as documented by folklorist John Quincy Wolf.

And that, of course, gives a whole different meaning to the lyric. “Run, nigger, run” isn’t supposed to be a threat; it’s a cheer... and a word to the wise. 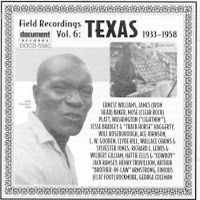 Listen for yourself. The only black version I can find is a half-minute fragment by prison inmate Mose “Clear Rock” Platt, recorded by folklorists John and Alan Lomax for the Library of Congress. Click here.

There is much documentary evidence that this was a popular song amongst colored folk. Joel Chandler Harris, that famous white expert on Southern Negroes – (he wrote the “Uncle Remus” stories) – mentions the song by way of defining the black term “patter-rollers” (“patrols”).

“In the country districts,” Harris wrote, “order was kept on the plantations at night by the knowledge that they were liable to be visited at any moment by the patrols. Hence a song current among the negroes, the chorus of which was: ‘Run, nigger, run; patter-roller ketch you – Run, nigger, run; hit’s almos’ day.’ ”

Another white gent, Abraham Hoss Yeager, wrote in his autobiography about a folk song which “grew out of the custom of appointing patrols to see that the Negroes stayed in their quarters at night.”

“It gave them extreme pleasure to elude these nocturnal guards,” Yeager continued, “and they celebrated their narrow escapes by song. The Negroes called these guards ‘patty rollers,’ and they embalmed the name in the chorus: ‘O! run Nigger run the patty roler’l catch you; O! run Nigger run it’s almost day.’ ”

Deeper still, the song was referred to by elderly ex-slaves in various documented “slave narratives.”

Harre Quarls of Texas remembered: “[U]s couldn’t go anywhere ’cept us have pass from our massa to ’nother. If us slips off, dem patterrollers gits us. Patterroller hits 39 licks with de rawhide with de nine tails. Patterroller gits 50 cents for hittin’ us 39 licks.

Likewise, Cresa Mack of Arkansas told an interviewer: “I remember that they used to sing: ‘Run nigger run, The paddy rollers catch you...’ Course if they catch you without pass, they’d beat you nearly to death, and tell you to go home to your master.”

The most detailed recollection comes from a man named Sylvia Floyd of Mississippi. Here is what Mr. Floyd told a U.S. government interviewer, exactly as it was rendered in the official transcript:

SYLVIA FLOYD: ... Dey never let ’em leave de plantation wid out a pass, an’ dey had patrole riders to go out an’ git ’em ifen dey didn’t come in. Dey didn’t hab to be much late ’fore yo’ could hear ’em commin’ after ’em.

De darkies use to pull pranks on de patrole riders by strechin’ grape vines across de road to throw de horses. At other times de slaves ’ud git a little riled up an’ jump de traces a little by fightin’ back wid fire, but dey couldn’t never do much fer dey never was allowed to git together enough to carry out nothin’. De patrole riders kept ’em purty well rounded up an’ seperated only ’cept long enuf fer a little frolicin’.

You know, I immediately thought about the chorus of the Temptations's "Run, Charlie, Run":

UBM, I've got that "Field Recordings Vol. 6: Texas" release and was listening to it regularly not long ago. I realized after a while there was a problem: that song is so damn catchy that I'd find myself absent-mindedly singing it to myself. This was not good, since I am white, and a white stranger quietly singing the n-word will not pass unnoticed under most circumstances. Had to employ some self-discipline and Just Not Do It anymore.

You are really getting into something UBM! There is an song almost as old as the one mentioned here called "Captain Blues."

Bryan: Your Lipscomb piece is beautifully written. I had never heard of Mance Lipscomb.

eMusic subscribers (like my happy ass) should know that Lipscomb's Arhoolie albums are affordably downloadable.

Also, Bryan, I didn't know (or had forgotten) that you're streaming some of your own music on the Web. I need to set aside some time...

Jena6: Buddy of mine in D.C. remembers a street rhyme from his youth that goes: "Run, nigger, run... the whiteys are coming!"

I love these kind of cultural echoes.

Estiv: Catchy, no shit? Heck, I even dig the Skillet Lickers version. They're jamming that tune! But, yeah, I shan't be rocking it in my car stereo.

this was really informative. thanks for doing the research on this! :-)

In their alternate universe where the south won the civil war, this is the theme song for their version of "Cops", which is called "Runaways"!

And their recording is really, really great, it should be released somewhere. It's a cappella except for a jaw harp, only they use the "run boy run / paddy rolla get you" lyrics instead of the original one...

i love that song! u seemed to have a problem about it when the white people sang it but when the black one did its ok. plus, that was in the 1920's, it was alot different back then.

Ever see the Ralph Bakshi movie "Coonskin",better know in Video/DVD form as Streetfighter?

The opening sequence done by Scatman reminds me greatly of this song.

Damn, don't think this is going to work. It's a link to a weird scene in the movie "The President's Analyst" with Godfrey Cambridge and James Coburn.

Funny movie, but this scene comes off as a little weird if you ask me. Here's the link, but I don't blog much so not sure it will work.

The song was published in 1867 in the anthology Slave Songs of the United States. This book is currently in print on Dover. Check it out on google books, see page 89.

http://www.amazon.com/Slave-United-States-William-Francis/dp/1557094349This is a very famous anthology, which of course predates John and Alan Lomax.

The song is indeed very old.

wow! UBM thanks for this. i have posted it to my Facebook page. the creativity black people specifically and oppressed people generally never ceases to amaze me. equally stunning of course is that fact that the patty's are still patrolling black life, the black folks are being locked up in record numbers and that USA supposedly a model of democracy locks of more people than any "developed" nation. not to mention the death and destruction that passes for foreign policy. IB

Why wouldn't you play that song in your car? I love to play Johnny Rebel(http://en.wikipedia.org/wiki/Johnny_Rebel_(singer)) songs in my car, especially when there are a whole bunch of people around! You ought to see the looks on their faces when they hear Johnny Rebel's songs for the very first time! Talk about a real Kodak moment!