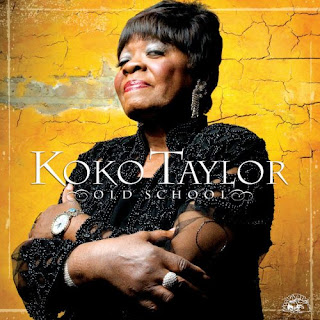 On September 28, 1928, Cora Walton was born just outside of Memphis, Tenn. Growing up, she sang in the church choir.

But destiny carried her to Chicago, where she married Robert Taylor and began performing in blues clubs alongside the likes of Buddy Guy and Junior Wells.

Koko Taylor had a big hit in 1966 with her cover of Willie Dixon’s “Wang Dang Doodle.” And through the ’70s and ’80s, her stardom in the blues world grew and grew.

But I only heard of Koko Taylor by way of Paul Shaffer, of all people. Shaffer is a great friend to blues, soul and funk music. On his 1989 album “Coast to Coast,” he featured Ms. Taylor on a remake of “Wang Dang Doodle.”

I’m streaming that track on my Vox blog. Click here to hear it.

Koko Taylor is still making music. This year she put out a CD called “Old School.” (Downloadble from iTunes and Amazon.com.)

To hear “Piece of Man” from that CD, click here.

Click here for a minute’s worth of Koko Taylor’s recollections for that “Chicago Blues” piece. She begins by addressing the fact that, though women such as Bessie Smith and Memphis Minnie were major stars of the early blues, very few women were singing the blues when she came up in the 1960s.

Here she is, doing her big hit:

I got big love for Koko Taylor - she's one of my favorites. If she's playing the Long Beach Blues Festival, or anywhere for that matter, you should totally check her out.

Thanks for this UBM - black WOMEN entertainers (as opposed to scantily-clad black girls who can't sing with their hearts) seem to be a thing of the past sometimes. We haven't forgotten!

Now I gotta get up on Bessie Smith, Ma Rainey and Victoria Spivey.

Swear to God, I could spend every waking moment listening to music and still not hear it all.

Thanks for unearthing that great video clip of Wang Dang Doodle. I've only seen her in action in David Lynch's "Wild At Heart" so it's really nice to see her back in the Chicago days bringing the grit so effortlessly. It's frustrating, as you said, the lack of prominent women artists from that scene, tho I suppose it was an affliction across the board. People like to chart the civil rights/60's social movement by way of popular culture but it always just shows you how imbalanced things were along gender lines. What Taylor must've put up with could probably fill a book or three but I'm glad, for the sake of all our ears, that she persevered.