Negro, Not a Negro – the booty version 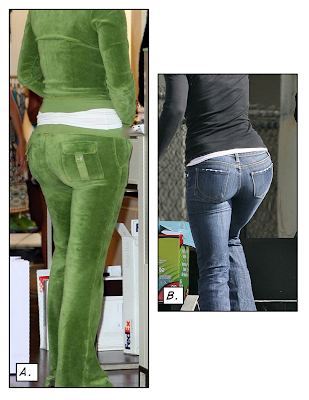 One of the things I like about writing this blog is that it attracts geniuses.

One such genius, DeAngelo Starnes, presented this idea in a previous comment thread: a “booty-shot” version of America’s fastest-growing quiz sensation... Negro, Not a Negro!

I immediately commenced to gathering booties.

It was difficult to find appropriate pictures that didn’t reveal some skin (which would make them useless for this game). But I’ve got four. And that’s just enough to proceed with this experiment.

Not a contest. No prizes. Just an experiment.

So check out these four bodies. And for each, tell me – Negro? Or not a Negro?

I have left the Latinas out of this, because I don’t wanna get into any bio-anthropological debates about the African ancestry of Puerto Rican or Cuban women. Also, for this particular theme Asian women are, of course, a non-issue. (I kid... I’m a kidder...)

So there it is. Men, mind your manners. Women, you probably have a keener eye for body shapes than we do... so come on and play.

In fact, that’ll be the object of this experiment: to see who’s better at deciphering these curves, women or men. 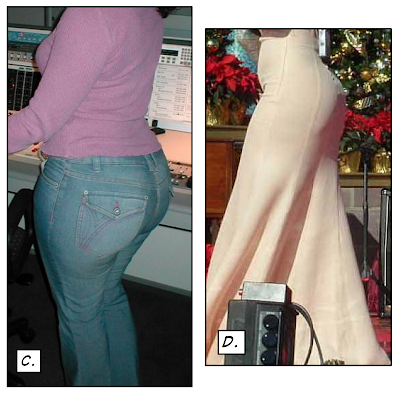 A was my ringer; that’s Kim Kardashian, possessor of the most talked-about hiney since Beyonce’s. Some folks (including one of my commenters) say that Kim’s butt is fake (i.e., surgically enhanced). I say: Don’t hate. I live in an Armenian neighborhood; Armenian girls got curves.

Anyways, between Kim Kardashian’s sex tape with Ray J and a rumored romance with Reggie Bush, dat thang is playa-tested and brutha-approved.

B is Jessica Biel. Cute shape... but she wasn’t fooling most of y’all. Ain’t no Africa in that one. 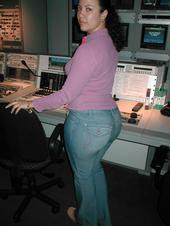 C you don’t know. She’s Sarah Hubinger. This photo doesn’t show her off proper, but it’s the only one I could find that doesn’t reveal her skin tone. Check out her MySpace page. It’ll give you a whole new outlook on plaid Bermuda shorts.

She’s got a book and DVD out called “Jiggles: Backyard Tales”... for and about “butt-loving men” and “booty-blessed women.” Apparently her ass is her life. And I see why. I bet half the pictures ever taken of her, she’s looking over her shoulder.

D is Kelly Clarkson. Again, this isn’t the picture to do her justice. (This one is.) I dig her shape. I have ever since “American Idol.” But she doesn’t put the booty out there, make it do some of the work. I don’t understand why.

Well, this was interesting. I probably won’t be doing it again, though. The right type of photos are just too hard to come by, as proven by these.
Posted by Undercover Black Man at 11:21 AM

Like so many of my experience with women...this is a game I may not be good at, but love to play.

I agree with the first poster.

Although I have to agree with CJB here with the J-Lo appraisal on D.

a and d are obviously not negroes. B is, i would guess c is a negro as well.

lol. this i won't do but if you get a male body part contest, lemme know!

Believe it or not, y'all... nobody has gotten all four correct.

I'm gonna guess that none of them are negro. I might add that B and D are really, really nice.

And, indeed, non of them are asian.

I'm with John. They're all NaN.

well if no one is correct yet, A and D are 100% not negro, solely based on the fact that i have seen those pics before and know who they are. My guess is that only B is a negro. If B is not a negro, then None of them are.

Armenian indeed do have curves. I know an Armenian/Russian girl and she does have a fine body.

So was this a Gedankadonkenxperiment?

(Link if that doesn't make any sense )

Clearly, that Kardashian chick has a fake butt, because hers was my only mistake.

Well those butts fooled me! They should've been in Trace Adkins's Honky Tonk Badonkadonk video.

I didn't know that Kim Kardashian had a famous booty. Jenna Van Oy's (Blossom's friend "Six") known to have back, too.

I also love it when hip-hop slang penetrates the white world. Like when a New York Times news story uses the word "bling" for jewelry.

I guess "badonkadonk" is the latest. I remember Bill Maher used it in a punchline on his show this year.

I also love it when hip-hop slang penetrates the white world.

I heard Eleanor Clift on "The McLaughlin Group" say dissed... like, years ago. That's when I first started paying attention to this crossover-venacular phenomenon.

Unfortunately, I haven't been rigorous about documenting. (I have, however, traced the movement of "bling" through the pages of the New York Times, like an epidemiologist tracing the AIDS virus. That one I will probably write about.)

I also happen to have huge, authoritative dictionary of slang, which is where I found out that "the Big Apple" was originally black slang for New York. (Black musicians' slang, in particular.)

So even the words white people use have been shaped by black folks, though they don't even realize it.

I visit urbandictionary.com when I want the meaning of something like "F*cking A". I've heard white people use it, but I didn't get it.

Another slang word I didn't get at the time is "wilding." I think most people first heard it during the Central Park Jogger rape incident in NYC many years ago. It's what the black and brown kids that were reported to be doing prior to committing the alledged assault.

I was like, "WTF is wilding?" I just assumed that some white reporter or interrogator got it wrong; that perhaps the kids had said (when they were coerced into confessing the crime): "We were out there, you know, trying to do the "wild thing." (Tone Loc's "Wild Thing" was big then.) Some how the two words were elided to create wilding, perhaps?

Didn't Chuck D use the word "wilding" in an early PE rap?

Like you, I never heard it till the Central Park rape case. I was assumed it was a localized black (and brown) slang word.

Also Jena6... I don't have a firm sense of your generation, but did it stop you in your tracks when McDonald's referred to itself as "Mickey D's" in a few commercials a few years back?

In the '70s, "Mickey D's" was totally black slang. It blew my mind that something could start with black folks on the street... and eventually be embraced, adopted and commodified by a massive multinational corporation.

Believe it or not UBM, my generation is your generation. Guess that was McDonald's trying to get down with the Zeigeist. :-)

This is gotten way off the topic of booties. :P

Okay, maybe that's a regional thing? :-) I remember being scolded for saying the word "battle axe" (old school for bitch) but not "booty." Actually, I don't think I used it, I said "butt" instead.

^ That's the thing, it didn't just mean "butt." To "get some booty" was the second-dirtiest way to express that particular thought... at least on the playground. But maybe the degree of nastiness of the word was a regional thing. After all, both Funkadelic and Sly put out singles called "Loose Booty" and they got played on the radio (which used to shock me!)

I'm going to have to yank the black cards of anyone who thought A was black. Not every big sloppy butt is a black woman's butt. The black booty is not about size - it's about pelvis tilt and muscle tone (which affects thickness, roundness and firmness). So you have to look at the following: Does it a) seem too far down the body or b) sit up high on the tailbone? Is the phattest part a) in the lowest portion (overhang), or b) in part that sticks up and out? Does it's bigness manifest itself in a) spreadage over a large surface area (including sideways and downwards) or b)in compact globes (assuming the woman isn't grossly overweight). When the woman walks, does it a) hang there and kind of jiggle slackly, or b) rock and roll and jump? If you get mostly As, then its NAN, no matter how big it is, and if it's mostly bs, then it's N, no matter how small. Of course eyeballing it from all angles while in motion is the best way to tell.