Not many people, beyond hardcore blues heads, know the name Katie Webster.

A standout boogie piano player from the age of 15, Webster played on hundreds of recordings in Southern Louisiana during the 1950s and ’60s (for stars like Slim Harpo and Clifton Chenier). 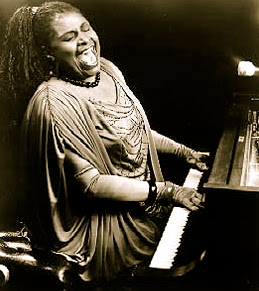 Her two-fisted piano style and gutty vocals brought her worldwide acclaim in the ’80s and ’90s. (They really dug her in Europe.)

Ms. Webster passed away in 1999 at age 63, leaving behind much rockin’ music. One track, “I’m Still Leaving You,” you can download as a FREE MP3 from Download.com. Just follow this link. (To give it a pre-listen, click here and hear it on my Vox audio stash.)

Now, a little something extra for your listening pleasure: Katie Webster’s cover of “Ya Ya,” the 1961 hit by New Orleans soul man Lee Dorsey. Webster’s rendition, labeled “Sitting In My La La,” is from a 1992 CD recorded in Germany and released in Europe – “The Many Faces of Katie Webster.” Click here to listen.
Posted by Undercover Black Man at 1:22 PM