Another round of Negro, Not a Negro! 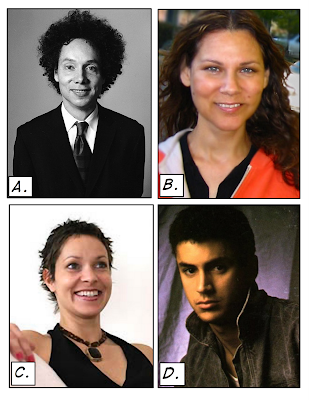 I liked when we played this game last week. I wanna play again. This time, let’s raise the stakes up.

This time it’s a contest. Each of you only gets one chance to guess.

The first person to correctly identify which of the four persons above are Negroes, and which are not Negroes, will win a prize.

The prize is a hardback copy of the 2006 book “Black Like You: Blackface, Whiteface, Insult & Imitation in American Popular Culture,” by John Strausbaugh.

I’m not going to tell you who those four people are. If you happen to recognize any or all of them, good for you, you have an advantage. Feel free to consult any source of information you got to determine their racial background.

But I don’t need you to tell me their names. No extra credit for revealing their names. All that matters in the comments section is your guesses for A., B., C. and D. – Negro? Or Not a Negro? (Double-click the images for a much closer look... like that’s gonna help...)

UPDATE (08/01/07): Oh wow... game over already! And I thought three of these were pretty tricky. Matt Norwood correctly classified them all.

A little later on, I’ll identify the four folks in the photos. Gotta run out and play cards now.

A. That’s Malcolm Gladwell, New Yorker magazine staff writer and author of the books “The Tipping Point” and “Blink.” His father is British; his mum is Jamaican.

B. That’s independent filmmaker Shereen Noon, who is of Swedish and Pakistani ancestry. She is the only one in this group without Negro blood.

Brotha, this contest is way too easy...since we come in every shade and hue under the rainbow. My guess is A, B, C, and D all are negroes

Where did you get your magic powers?

You win. Tell me where you want the book mailed; you can email me at the address on my profile page.

God damn that was fast. To me it looked like only 'A' was a negro.

Can we have a special round of "Negro, Jew, or Negro Jew?"

Hey - I nominated you for a Black Weblog Award! Great site!

^ Thanks, Edwina. Much appreciated.

Daaaaaag! Oh, well, I would've lost anyway. I had "D" as the non-Negro.

not mantronik!! i'm sorry i didn't get a chance to play :( but the mantronik reference makes up for it.

As a white European "culturalist" I am usually not much bothered with the race issue.

I happened to arrive here by chance, but a discussion like this strikes me as intensely racist. Not that there is anything wrong with that, but I wonder what you and your audience would say if a white person would play games like that. If one once accepts racism as an acceptable way of thinking, everybody should be "allowed" to join the fray. Everything else would be bigoted.

One question and I am not trying to be provocative here: What point are you trying to make if you are labelling a person as Negro who clearly doesn't look it? What other criterion for "race" is there but looks? But let's say for argument's sake that the Negro gene percentage can be specified to the nth decimal point. If looks don't count, how far would the mendelian segregation have to go not to be considered a Negro anymore? Ad infinitum? Surely that would be a reissue of the old "one drop rule".

If that should be the case I think I will go on judging people by what I see or rather: not al all.

As I said, I am not trying to be provocative, I am trying to understand.