A shot of Don Imus, with an Amiri Baraka chaser 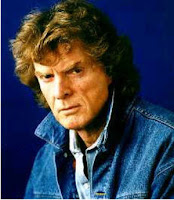 And the Rev. Al Sharpton says he’s cool with that. While the National Association of Black Journalists says uh-uh, hell no.

I could give a shit either way. But it’s a good excuse to stream a little bit of “comedy” from Imus’s 1974 LP, “This Honky’s Nuts.” (Apparently he fancied himself the white race’s answer to Richard Pryor.)

Click here for a 5-minute portion of Imus’s “Uptight White” routine (which, by my reckoning, contains just one funny joke).

And why not wash it down with some fiery spoken words from Amiri Baraka, also from the mid ’70s? Click here to listen to “Dope,” which is available on the Smithsonian Folkways double-CD “Every Tone a Testimony.”
Posted by Undercover Black Man at 11:57 AM

Labels: Shot and a Chaser

I really don't care if Imus is on or off the air either. I've never understood his appeal and this routine proves why...he just ain't funny and a jerk to boot.

I'm trying to guess which one of his jokes you found humorous...they get Ray Charles, we get Sammy Davis Jr.? Not much else came close.