How safe are you? 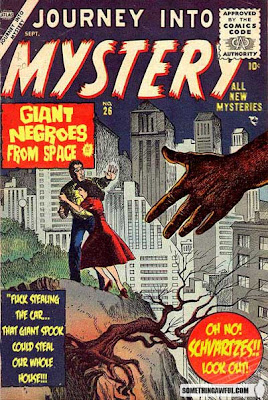 First thought: "Oh, please let this be photoshopped." So, of course I had to investigate.... LOL

I don't think that would have passed the Comics Code Authority.

On the other hand, if it's not a drug -addicted Giant Negro or a Giant Negro Zombie, it's probably OK.

I HAVE to look this up....UnderCover, you know that this is crazy for yours truly as I am a comic book collector(which we discuss on the blog from time to time)....This has to be photoshopped....crazy stuff

Now I wish that Ed Wood was still alive so he could make the film version of "Giant Negroes from Outer Space".

I can see it now. Tor Johnson in blackface.

UBM: All this talk of Giant Negroes forces the question:

How Tall Are You?

Speaking of Marvel and race, I note that this week, DC announced Death of the New Gods.

It got me thinking. Now, Jack Kirby, who co-created the FF, the Black Panther, the Hulk, created the New Gods all by his lonesome. And the most prominent black member of the New Gods? The Black Racer. Who was the personification of Death.

And he wore skis. See, the Silver Surfer SURFED, the Black Racer RACED. On skis. In the air.

"PRAY HE DOESN'T COME FOR YOU! RUN! RUN! DEATH IS THE BLACK RACER!"

jena6 and dburt: Oh yeah, this cover is a gag. Double-click it to enlarge it, and you'll see the word "Fuck."

I just got giant Negroes on the brain...

Tor Johnson in black face! What an image! Don't forget Bela in an afro (no blackface, he could be a pale-faced zombie)!

Thank goodness UBM. Actually I realized as much when I looked up "Journey into Mystery" and found this.

I almost pissed my pants.

Here's the original comic cover if you're curious.