Last week on ShyOneLung’s blog, S.O.L. was streaming some Bill Hicks. (I miss Hicks.) I commented that there’s nobody out there in standup comedy doing what Bill Hicks did. 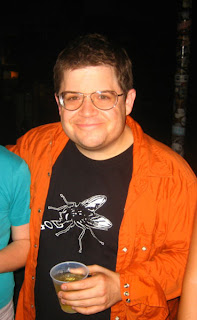 I take that back. Patton Oswalt is rocking it in the Hicksian mode.

Hicks had his cigarettes, Oswalt has his booze. Hicks could channel a Prince-of-Darkness type vibe, whereas Oswalt’s shaggy good-naturedness is always on display. And while Hicks was a freaking genius, Patton Oswalt is merely smart.

But when it comes to razor-edged political commentary, off-the- wall sex stuff and a generally bent view of the world... yeah, I’m liking Oswalt.

He released a new CD this month, “Werewolves and Lollipops.” A track called “The Dukes of Hazzard” (in reference to George Bush and Dick Cheney) is available as a FREE MP3 by way of Download.com.

I recommend you click here and take full advantage of the freeness. After all, what else of value do you expect to get today for nothing?

(The photo above, by Sittered, is used under a Creative Commons Attribution 2.0 License.)
Posted by Undercover Black Man at 1:39 AM

Give Oswalt a few years, and he'll have honed his craft into something close to what Hicks could do...

Tom: Oh, I'm not knocking Oswalt... not by any means. I'll take him just as he is right now, and be very grateful.

But Hicks was just ferocious. And that's not Oswalt's style.

I've been a fan of Patton's since I first saw him on "Small Doses." I love his voice work as Remy in "Patatouille," too.

Patton Oswalt is THE comic of the moment. I caught him opening for Joe Henry (the musican) nearly 5 years ago and was hooked. Last week I saw him headline a bill at Largo a ago with 4 other comics. They were all funny and then he came on and fucking destroyed the place. And did not do a single bit from his new album or anything I'd ever heard him do before.

Thanks for featuring him David. His new album is an instant classic!

Also, look for him on the Flavor Flav roast coming up soon on Comedy Central. He told some stories about at the Largo show and it sounds like it should be a hoot.

^ Patton is supposed to be at the Largo tonight, opening for Michael Penn. I need to get my ass in gear and check him out live...

P.S. I'm pretty sure I saw Oswalt do an Un-Cabaret set, but that must've been 8 or 10 years ago. What stuck in my mind most was his look, not his material.

I've got to see him now that he's in full bloom as a nightclub comic.

Let us know how it was if you go tonight, UBM. I'll hopefully be seeing "Ratatouille" (not "Patatouille," d'oh) at the El Capitan tonight, or I'd try and check out his act myself.