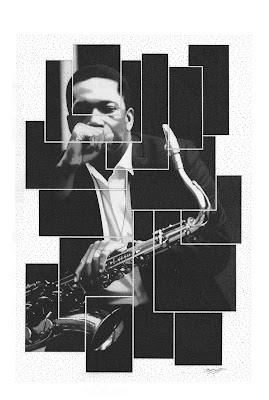 “I felt if [the critics] were really and genuinely interested, or thought there was something here, instead of just condemning it... let’s talk about it. But no one ever came forth...”

Today is the 40th anniversary of the death of John Coltrane.

To honor that, I’m streaming a couple of minutes of a rare interview with Trane, recorded in November 1966 by historian Frank Kofsky. (Kofsky went on to write “John Coltrane and the Jazz Revolution of the 1960s.”)

Click here for the audio clip, in which Coltrane discusses the hostile critical reaction to his newer, avant-garde music... particularly from Down Beat magazine.

You can own Kofsky’s full hourlong interview with Coltrane on CD. It’s part of a 2-CD package from Pacifica Radio Archives, which includes a radio documentary featuring an interview with his widow, Alice Coltrane. The price is $28.50.

The artwork above – “Jazzman: A Portrait of John Coltrane” by William Noguera – is © 2006 Institute For Unpopular Culture. Prints are available for sale.
Posted by Undercover Black Man at 6:38 AM

This is a great pick! You've done it again!

I must admit, I can't get my head around "Ascension" either.

Thanks Bra! The first thing I did when I came to Philly fifteen years ago was to head to the Coltrane museum in North Philly.

In honor of my man, I think I will slip Ole' Coltrane in the CD now and sip a cold one.

BTW, the best Coltrane CD ever is "My Favority Things" with McCoy Tyner,Steve Davis, and Elvin Jones backing up Trane.

"I got some John Coltrane on the stereo, baby, make you feel alright /.../ I said that a man works hard all day and he can do what he wants to at night."