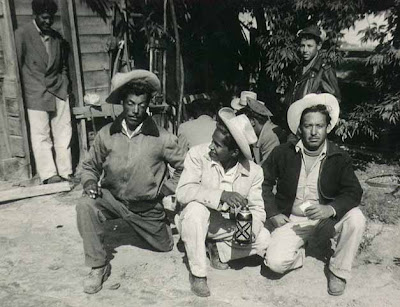 Let’s talk about sugar beets. But before we do, I must say again that I’m not an “open borders” guy. I don’t believe that every Mexican, Guatemalan or Salvadoran on Earth is untitled to U.S. citizenship.

And if we choose to build a fence or a wall or a moat along our southern border – to impose some damn order on the flow of migrants, and to show that national boundaries mean something – that’s our right. (Sounds like a good idea to me.)

What fries my beans is when certain anti-immigration types badmouth “mestizos” on a racial (or “civilizational”) basis... as if Mexicans were unassimilable, and as if white people single-handedly built this country in the first place.

The fact is, at certain points in U.S. history – when there was hard work to be done and no white people to do it – America picked up the proverbial telephone and dialed “1-800-MEXICAN.”

Consider World War I. That’s when “the great influx of Mexican labor began” in California, wrote Carey McWilliams, a prominent leftist journalist, in 1939.

“The newspapers and farm journals in 1917 contain many references to large groups of Mexicans, in units of 1500 and 2500, being brought into Imperial Valley by truck from San Felipe and Guaymas ‘to relieve the labor situation,’ ” according to McWilliams.

“The farm journals refer to the year 1920 as a ‘Mexican harvest,’ indicating that at least fifty per cent of the migratory labor employed that year was Mexican.”

When the Great Depression hit in 1929 and Mexican labor was no longer in demand – and as these migrants clogged the welfare rolls – what did America do? It rounded up and deported Mexicans by the hundreds of thousands.

But guess what? Along came World War II. As millions of young Americans went overseas to fight, and as the U.S. labor pool shifted to wartime industries, agribusiness once again dialed 1-800-MEXICAN.

“In 1942... the United States signed the Bracero Treaty which reopened the floodgates for legal immigration of Mexican laborers,” according to the website for the 1999 PBS documentary “The Border.”

Between 1942 and 1964, several million Mexicans were brought into this country as “braceros,” doing farm and ranch work on a temporary contract basis.

We can go back even further. Like to 1897, when Congress slapped a 75 percent tax on foreign sugar. What this did was to trigger a boom in the U.S. beet sugar industry. (Today, more than half the sugar consumed in the United States comes from sugar beets, not sugar cane.)

Sugar beets grow best in the cool of the Great Plains and the upper Midwest, in places like Nebraska. In an article titled “Mexicans in Nebraska,” on the website of the Nebraska State Historical Society, Ralph F. Grajeda describes the rapid growth of this industry:

Tending and harvesting all those beets was difficult work; it was “stoop labor.” So who you gonna call?

“The increased need for beet laborers... [was] met by the regular and methodical recruiting of Mexican agricultural workers,” according to Grajeda. “In 1915 the Great Western Sugar Company recruited and transported 500 workers into its Colorado, Wyoming, Montana, and Nebraska sugar beet territory. By 1920 this figure had increased to more than 13,000.”

In the town of Scottsbluff, Neb., to this day, you’ll find the Mexican-American barrio on land formerly owned by Great Western Sugar and sold off to individual families.

So, here we are. Congress is trying to figure out a new immigration policy, while far-rightists paint the Mexican laboring class as an uneducable, socially parasitic, crime-prone, squalorous, drunk-driving, disease-bearing horde. (“Mestizos have an average IQ of at best 90. They are very low skilled, have very little interest in education, and their presence in large numbers will steadily drag down our economy and society to the level of a third-world, Mestizo-type society...” – Lawrence Auster, April 12, 2006)

(My thanks to Amando Alvarez for granting me permission to use the photograph above.)
Posted by Undercover Black Man at 9:59 AM

Among all the "foreign" cultures, the Mexican culture has had the biggest impact in this country...language, food, dance and art-wise.

Would America really be the same without the taco and the burrito? I don't think so. Mexicans have been in this country for so long I'm surprised people still have so many issues with them. I live in a racially diverse apartment complex (blacks, mexicans, indians, chinese, etc.) and all of them look pretty well-integrated to me! Their kids speak the language perfectly, I can communicate with the parents too and they seem to be hard-working.

Laurence Auster is a putz.

Does he want to go out and pick produce, bus tables, clean houses, mow yards?

I do not support a free flow over the border, but since it's been happening and continues to happen it seems that we should look at solutions to make it work legally and fiscally for all.

As to his comments about IQ he really needs to check the national average for all those Walmart shoppers in the parking lot states.

As long as life at the bottom of Mexican society sucks as much as it does (and America's wealth distribution is positively Scandinavian compared to Mexico's) lots of folks are going to take their chances in el norte.

Btw, UBM, have you seen this?

Re: Random interghost's link:
Leave it to the FT to misinterpret Putnam's study on immigration. I actually read that study yesterday because it deals a lot with Scandinavian immigration, which I'm something of a nerd for, and what it's *actually* saying is that immigration reduces social capital in the short term, but increases it in the long term. Not exactly a 'Open the borders!' argument, but not as dire as the FT summary paints it.

Anyway, while reading this post, UBM, I found myself thinking: You know how, in economic studies, they say stuff like 'we controlled for education levels' or 'we controlled for effects of location', etc? Don't you wish we could somehow 'control' for racism in this whole debate? Something might actually get, you know, *done* if we could get past the 'they're uncivilized'-style arguments and discuss the real problems. I think most Americans actually agree on this way more than we think.

Lawrence Auster is a pinche pendejo. Does he even know what a mestizo is?

Thanks, Interghost and Rottin', for the linkage and commentary on the FT piece.

There's something counterintuitive about the thesis that multiculturalism breeds distrust. I see with my own eyes a 25-year-old black dude who attended a very diverse public high school, a couple of diverse colleges, and now he mixes with whites and Asians and Latinos like it ain't no thing.

Had he grown up in Oakland, say -- or if he were white and grew up in Ames, Iowa -- would he be able to interact so comfortably with all different types? I think not.

I actually read that study yesterday because it deals a lot with Scandinavian immigration, which I'm something of a nerd for, and what it's *actually* saying is that immigration reduces social capital in the short term, but increases it in the long term. Not exactly a 'Open the borders!' argument, but not as dire as the FT summary paints it.

I'm curious (and I don't have journal access, so I can't read the article), but does he provide actual explicit proof that it does increase it in the long term, or is it the usual bunch of vague happy-face cliches?

A few months ago, couple of black dudes, ball players at the local community college, were shot by the local Mexican gang, the Alabamas, cause they were black. In Canoga Park, that can be enough.

Unlimited Latin immigration has been a disaster for working class black Americans, plain and simple.

It's wrecked the LA school system, forced hospitals to close due to financial collapse, and cut the bottom out of the market for low skilled black laborers.

The only bright side is that the Latino crime rate is over 3 times the Anglo rate, so black folks aren't the majority in the jails and prisons anymore.

I call that progress. Let's take a moment to celebrate diversity, shall we?

"Ethnic diversity is increasing in most advanced countries, driven mostly by sharp increases in immigration. In the long run immigration and diversity are likely to have important cultural,
economic, fiscal, and developmental benefits. In the short run, however, immigration and ethnic diversity tend to reduce social solidarity and social capital. New evidence from the US suggests that in ethnically diverse neighbourhoods residents of all races tend to ‘hunker down’. Trust (even of one’s own race) is lower, altruism and community cooperation rarer, friends fewer. In the long run, however, successful immigrant societies have overcome such fragmentation by creating new, cross-cutting forms of social solidarity and more encompassing identities. Illustrations of becoming comfortable with diversity are drawn from the US military, religious institutions,
and earlier waves of American immigration."

And here's a Guardian link that includes a link to the study itself. With British newspapers, I find it helps to read the left-wing-biased and the right-wing-biased ones before taking anything too seriously. Both sides have a Moore-caliber ability to obscure the facts in favor of making a point.

UBM,
I enjoyed your blog. I´ve been studying Immigration issues for the past year. I wanted to understand why people are so angry. Currently I´m reading the book "Al Norte, Ag Workers in the Great Lakes Region 1917 - 1970." The book details the history of the Sugar Beet Industry. You are absolutely right in your timelines and the 1 800 description.

I am a Mexican American mom. I started my own Blog. Please give me a read if you get the chance. I´d appreciate your feedback.