The Vice President and His Mulatto (postscript) 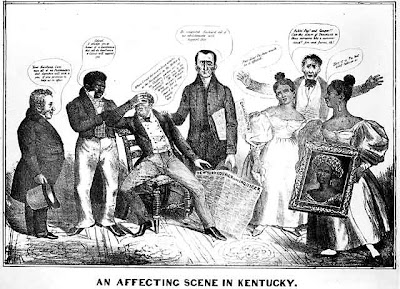 Brenda Gordon thanked me warmly for yesterday’s post. She also sent me a link to the above image: a political cartoon from 1836 which attacks Richard M. Johnson by mocking his love for Julia Chinn and his fathering of quintroon daughters.

Titled “An Affecting Scene in Kentucky,” the cartoon shows Johnson – at that point the Democrats’ vice presidential nominee – distraught after reading the New York Courier and Inquirer (a pro-slavery newspaper). The cartoonist put these words into Johnson’s mouth:

“When I read the scurrilous attacks in the Newspapers on the Mother of my Children, pardon me, my friends if I give way to feelings!!! My dear Girls, bring me your Mother's picture, that I may show it to my friends here.”

That’s supposed to be Julia Chinn in the painting, wearing the turban. Of course, being an “octoroon” (one-eighths black), the real Julia Chinn most certainly wasn’t brown-skinned. Johnson’s two daughters even less so.

The cartoonist also ridicules the black man at Johnson’s right side, having him (in Negro dialect) pledge “de honor of a Gentlemen dat all de Gentlemen of Colour will support you.”

The cartoonist was Henry R. Robinson, a prominent illustrator of the era. In fact, you can order a lithograph of “An Affecting Scene in Kentucky” for yourself from the Library of Congress! (Click here, and you can also read a little more about the cartoon, including what those other characters are saying.)

You can also read about the cartoon here, at the Harper’s Weekly website.
Posted by Undercover Black Man at 7:18 AM