The so-called “greatest newspaper in the world,” the New York Times, published several embarrassing corrections today. One deals with a fabricating source, another with a quasi-plagiarizing book essayist. And one deals with a Misidentified Black Person.

Other media critics will surely spank the Times over the made-up shit and the intellectual theft. But I guess it’s up to me to administer some ass-reddening discipline on the matter of the MBP.

On March 11, the esteemed film critic Terrence Rafferty waxed esoteric about the French New Wave and director Eric Rohmer, whose 1972 movie “Chloe in the Afternoon” was just remade by Chris Rock as “I Think I Love My Wife.”

After describing the free-spirited character of “Chloe” from Eric Rohmer’s film – a woman who tempts a married man to cheat on his wife – Rafferty wrote this:

“There’s a hint of that existential semi-malaise in the intense attraction of Mr. Rock’s character, Richard, to his Chloe figure, Nikki (Gina Torres). But mostly he’s really randy.”

Now, I can’t blame Rafferty for never having watched “Cleopatra 2525” on TV, and thus not knowing who the hell Gina Torres is. But good Lord… this man reviews movies for a living. He doesn’t know that Kerry Washington is one of the best young actresses out there? He hasn’t seen “Ray”? “The Last King of Scotland”? Or her breakout indie performances in “Our Song” and “Lift”?

Strange thing is, the New York Times ran this photo with Rafferty’s piece: 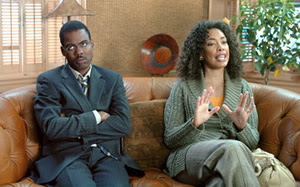 The caption correctly identifies the woman as Gina Torres. Now study that picture: Does Ms. Torres’s character look like Chris Rock’s temptress? Or his wife?

“An article on March 11 about Chris Rock’s ‘I Think I Love My Wife’ and other remakes of French New Wave films misidentified to the actress who tempts Mr. Rock’s character. She is Kerry Washington, not Gina Torres.”

Oh, and another thing: Why did it take two weeks to fix this mistake? Yo, bitches… I’m still waitin’ for that Satchmo correction! Don’t think I forgot.
Posted by Undercover Black Man at 1:27 PM

Do these people not have Internet?

Becky: That's the rub, isn't it? It's never been easier to check facts. With imdb.com, it would take all of 10 minutes to double-check every film-related fact in Rafferty's piece. What seems missing, inexplicably, is the will to double-check.

Nerdy white people also know Gina Torres from "Firefly" (and I think I just admitted to being one of those nerds).

No judgments here, Heather. (Not after I just copped to watching "Cleo 2525.")

Maybe it is because Gina Torres is so smoking hot that you'd assume she's a temptress. Then you'd find out it some other lady, and you'd say - why? Gina Torres is so awesome? Even when they try to make her frumpy, she looks amazing.

maybe he didn't really watch the movie...
i do wonder about these critics sometimes.

What seems missing, inexplicably, is the will to double-check.

Don't they have copyeditors and/or fact-checkers at the Times? OTOH, I've had editors change facts in my stories before because they "thought they knew" their fact was the correct one, only to ruin my stories because I was right all along. Grr....

Speaking of Gina Torres, she was one of the few women in the defunct CBS series, "The Guardian" who actually seemed competent enough to do her job. I wish there were shows/flicks depicting female professionals, as headliners focusing on work and given similar moral dilemmas that men get. Without the never ending procession of stories about how they effect men. If cast well, you can pull it off. There are NO Jane Tennisons or anything approaching it in THIS country.

How about it Mr. Mills?

I came across a post of yours from about 8 years ago where you said you had recommended they bump up Kirkendall as Andy's next partner. She was far and away the best of the women on THAT show.

Can you imagine Thompson, Torres, and Wanda DeJesus (who's totally underused) -- and Khandi if she ever gets off that procedural show -- as headliners?
I'm just sayin'. . .

Sorry if I've veered too far off topic.

vibe magazine put my picture in (a full page!) from a wireimage photo, identifying me as "robert greene, hip hop producer." i sure mr greene was i surprised as i was by this, given that he's black and i'm white.

goes both ways, i guess. and they never ran a correction that i know of.

Oh, it goes all kinda ways, Robert. Just happens to go this way a lot.