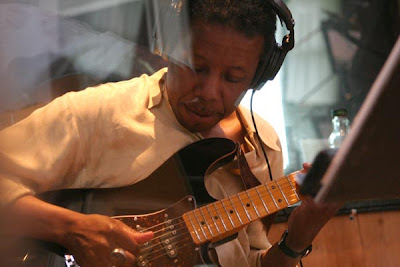 It’s my goal to shine a tiny spotlight on some gifted creative folks you might never have heard of... those who tend to fly beneath the radar of America’s corporate media. Like satirist Darius James, and cartoonist Shawn Belschwender, and album-cover artist Pedro Bell.

To launch this “unrecognized genius” interview series, let me introduce Jef Lee Johnson, a guitarist/songwriter/singer from Philadelphia. His resume as a sideman and session musician is impressive. He’s playing jazz clubs right now as part of George Duke’s quartet. He toured with D’Angelo when D’Angelo was hot like fire. Jef even sat in a few weeks with the “Late Night with David Letterman” band back in the ’80s.

But I am absolutely nuts about his solo CDs. His first one, “Blue” (1995), contains some of the tastiest funk to emerge in that decade. It was me who recommended the track “Jungle” to my main man David Simon; he featured it prominently in one of his “Homicide” episodes.

(Click the title to hear another “Blue” track, “Everything Starts Right Now,” via my Vox music stash.)

When I finally got a show of my own on the air – a little something called “Kingpin” – I broke off some Jef Lee Johnson for myself, using two tracks from “Hype Factory.” That 2001 double-CD is Johnson’s masterpiece, with one intriguing melody after another. Had “Kingpin” lasted longer, I would’ve designed a whole montage around “Sight Sound Mission.”

As a guitarist, Johnson can rock all styles, from the grimiest blues to sunshiny pop. (He has covered a Monkees tunes and Donovan’s “Mellow Yellow.”) Click on this track, “Peace and Love Infinity,” to hear what he can do with just a couple of peculiar rhythm licks.

Closing in on 49 years of age, Jef Lee Johnson is still waiting to be discovered by a larger audience. His most recent CDs were bankrolled out of his own pocket and distributed by Dreambox Media. I suggest you start with “Hype Factory,” then tell me if I done steered you wrong.

I also recommend you try to witness him in person. Those in the Bay Area can catch him tonight or tomorrow night with George Duke at Yoshi’s. (Actually, tonight’s shows are sold out.) If you’re closer to Manhattan, you can check out Jef’s own trio Monday night at Jazz Standard.

I met Jef for the first time eight days ago in Culver City, Calif. Here’s our conversation. (Many thanks to Jonathan Beedle for the picture above.)

DAVID MILLS: When did you start playing?

JEF LEE JOHNSON: When I was around 12, I think, I begged my older sister to teach me some chords on guitar. And then when I was 13, my mother made me start playing with her in church, whether I liked it or not. Playing bass in church. I didn’t know how to play; she said, “You’re just gonna follow me.” I didn’t know what I was doing, I was just making weird noises.

MILLS: Who did you listen to that made you want to play? What was happening musically at the time? Sly and the Family Stone?

JOHNSON: I wasn’t a good enough musician to appreciate Sly or Monk or Hendrix. I was just listening to television. Like, you know, cartoon music. “Johnny Quest,” the Warner Bros. stuff.

Used to be Tom Jones had a TV show, and his music director was named Big Jim Sullivan. Going into commercials Big Jim would play little guitar things, and I would sit there with my mouth open, like, “Wow.”

Anything that had a guitar in it, I would gravitate to. So like “Hee Haw,” Roy Clark and Buck Owens…

JOHNSON: Yeah, pickin’ and grinning’. My theory teacher would say, when I was a teenager, “Yeah, your ear was developing, you didn’t even realize it.”

JOHNSON: No, I’m talking commercials. I’m talking like “Miller High Life, the Champagne of Bottled Beers.” The little jingles, I was really into them. Not even the [hit] songs, the jingles – Celia Cruz did the Miller song, or Tony Bennett.

The songs? Yeah, they were cool. But the commercials were what I really liked. I’m serious, man.

Even before you came over today, I was looking at Boomerang. The old “Yogi Bear” show, “Huckleberry Hound,” “Quick Draw McGraw.” All that weird little stuff is like still in my head.

MILLS: Back in the ’70s, city kids walked around with guitars the way kids today walk around with basketballs. Do you feel like an endangered species? Do young kids coming up today have a reason to pick up the guitar? Are they picking it up?

JOHNSON: I don’t know if it’s so much endangerment as natural selection. Things are getting more mechanical and push-button now.

And [Terence] was talking about some film he did, and some other people – whose names I won’t mention – they just did hip-hop tracks. They didn’t look at the movie and do some emotional music to move the film along.

And I was explaining, well, there’s a whole generation of kids, adults, whatever, that are very, very well-to-do, they’re making a lot of money, and you cannot explain to them what Terence Blanchard does. They have no concept of him or George Duke or Herbie Hancock – or Elmer Bernstein or somebody like that – sitting down looking at a film and making some notes about something musically that goes along with the visual content. They’ll just do some track about some guy in the film or some girl’s behind.

I don’t know if that’s good or bad, but that’s what time it is.

MILLS: It’ll make you cry if you think about it too long. Do you know anybody 20 or 25 years old who plays the guitar? Where is the next generation of black guitarists going to come from?

JOHNSON: I’m a bad person to ask because I don’t know anybody, period. I’m like an outcast. I’m not accepted in most circles musically. That’s no joke.

JOHNSON: No. I mean, the people that ask me to play hire me because I’m either peculiar, or disciplined enough to try to keep their music together without needing the badges or awards that go along with it.

One of the best compliments I ever had is George Duke saying, “Yeah, man, I love having you in the band because I can go wherever I want to go, and you’ll keep things in line.” Or he’ll do what he does and I’ll go wherever I want – ’cause he knows I’ll go.

I’ve quit most of my other gigs anyway because I just want to dedicate the rest of my existence to trying to do whatever this Jef music is.

I don’t do the usual come-in-and-joke-around – “Yeah, when I was on the road…” So I don’t know who the musicians are in my own generation, as opposed to older or younger generation.

JOHNSON: Little black kids don’t even realize that that’s their music. Their great-great-grandparents created that. They only go back as far as grunge or whatever. Older kids only go back as far as the Rolling Stones. They don’t even realize, like, Big Mama Thornton or Chuck Berry were actually doing this music, getting’ beat-up, gettin’ chased out of these little lean-to places.

That delete button just keeps everybody out of focus. Like deleting the lineage. That’s an American phenomenon.

MILLS: I see you’re on MySpace. Are people finding you through that for the first time?

JOHNSON: Yes. And hopefully it’s putting things back in the hands of the artists, I hope. Because there’s no meetings and demographics. It’s like, put your mess out there, there’s 150 million people on it, they can check you out, the end. For somebody like me, a little poor starving artist, it’s a great thing.

MILLS: Here’s what perplexes me: Why do some of our best musicians – bona fide virtuosos like Bourelly and Jamaaladeen Tacuma – have more going on overseas than they do here? Jamaaladeen needed a Japanese label to put out most of his recent CDs. Bourelly lived in Berlin for a while. And you’ve spent time in Paris. What’s going on over there that ain’t happening here?

MILLS: How much time have you spent in Paris?

JOHNSON: Not a lot. Probably not enough. We should tour over there. It gets back to management and all that stuff. I mean, I’m not a manager, I don’t know how to get gigs.

MILLS: Never had a manager?

There’s a lady coming from Belgium on the 26th who might be a good – That’s another thing about MySpace. There might be some people we’ve found that might be good fits to get us some gigs, especially in Europe.

In fact, we’ve had a couple of gigs out of MySpace. This series [of weekly gigs at Jazz Standard], I’m not sure if that was MySpace or just some cat that was a fan. He kind of forced the issue at this club. Cat named James.

MILLS: Who was that? What’s his name?

JOHNSON: James. I don’t know what his last name is. He got us a gig in his club called the Union Hall in Brooklyn. And then he went to this other club; “Jef is playing in your club.” The guy [told me], “I don’t know you, but this guy James said you’re playing in my club.”

MILLS: I got turned on to you by Pete Wetherbee, who co-produced your first CD in 1995. How did that project come about?

JOHNSON: Well, he lobbied for it. A Florida label put up [the money]. We did it.

MILLS: Was Pete still working for Bill Laswell at that time?

MILLS: What was the reaction to “Blue”? It was a great album.

JOHNSON: There were never any tours or gigs right after any CDs so we could get feedback. It was always, “You should do in-stores.” “No we shouldn’t.” There were always these weird little wars going on between me and everybody.

MILLS: You got a problem with in-stores?

JOHNSON: We’re kinda rough on the ears, man. We did one in Florida and, immediately, warming up, mothers were grabbing their kids and running out the store. A couple of punk kids ran up to the front; everybody else was putting their hands over their kids’ ears. We should’ve done, like, bars or whatever, as far as I was concerned. …

We’ve never had the true test yet, as far as [whether] the music is affecting people. This thing in New York, this series, we’re getting a little taste. We got our first-ever standing ovation at the end of one of the gigs. So we are doing something that people are feeling. And that’s all I’m concerned about.

If I can make a little money, that’s a bonus. But if we’re not playing the music right, that’s my main concern. Jury’s still out.

Posted by Undercover Black Man at 7:40 AM

that's deep. i'll check him out on myspace. but in one post you managed to mention several of my favorite things:

guitars (i just bought one)
homicide (LOVE the show, got the set for xmas -- i miss it and there still hasn't been a decent replacement on fridays)
flea (chili peppers circa 89 are deeeelightful)
and good music.

Glad you liked, Judith. I fantasize about guitars all the time... but it's taking a real step to buy one.

thank you for the interview,
I only recently discovered Jef Lee Johnson by stumbling on the "Blue" album on another blog (NeverGetOutOfTheBoat),
and I was really blown away by the music!