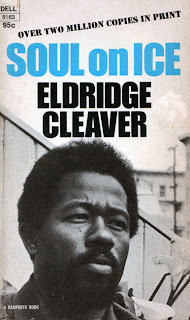 To usher out Black History Month, I’ve dug deep into my journalistic archives, back to the old college days.

In 1982 I interviewed Eldridge Cleaver, former “Minister of Information” for the Black Panther Party. He had come to the University of Maryland on a lecture tour. The one-time gun-toting Marxist revolutionary was now a Reagan Republican and a fan of Sun Myung Moon’s Unification Church. Which made for a lively conversation.

I have no romantic attachment to the Panthers. In fact, I resent the simple-minded glorification of violent black radicalism. If Mr. Cleaver’s recollections can be trusted, my resentment is justified.

Cleaver died in 1998 at the age of 62. He certainly lived an interesting life, including seven years of exile in Cuba, France and Algeria (after a gun battle with Oakland police). This three-part interview covers a lot of ground. Stick with it till the end of pt. 3 and you’ll see perhaps the weirdest thing anyone ever said to me during an interview.

DAVID MILLS: It seems quite a change of heart you’ve had over 15 years. During the Black Power movement, you thought the primary crisis we faced was the American system. Now you say it’s the Communist threat.

ELDRIDGE CLEAVER: It’s not a total change, because the stuff I was preoccupied with in the ’60s is still true. American history is American history. I’m not trying to say America is utopia. Far from it. But I think that in the past I was oblivious to what was going on in Communist countries, or I didn’t believe what was said against the Communists.

I was really favorable toward the Communists because they made such a strong critique of capitalism and America. They were opposed to America systematically, so I viewed that as a source of strength or a source of alliances. Many people do this. We used to say that America’s enemies are our friends. …

What changed my whole point of view was that I had a chance to leave America and go live in Communist countries and see what was going on there. Without having that experience, I probably would still, like a lot of other people, be running around pushing the same line.

We have many problems in America, and some of them are absolutely outrageous. But with all our problems, we have more freedom in this country than any of those Communist countries.

So what I say today is we need to be more precise in what’s wrong with America. In the past we just used the shotgun approach, and just said burn it down, destroy it, overthrow it, that sort of stuff. Well, that’s very dangerous thinking. It’s not even thinking. It’s sloganizing.

Everybody admits that we have a huge economic problem, but the question becomes what do we do about it? Just close the curtain down, you know? Stop the show, change all the furniture around on the stage, and then let the show go on?

That’s one of my gripes with revolutionaries. Most of these revolutionary scenarios call for exactly that. But it’s like changing a tire on a moving vehicle; we have to figure out how to solve these problems while the thing’s in motion. So that means being very precise about what’s wrong.

MILLS: Let’s backtrack, because it’s ironic. Do you think that during the Panther movement when you were advocating revolution, that you and the Black Panthers were being used by the Communists?

CLEAVER: At different stages, you could say that. The Communists did not summon us into being. We grew up in our own community around our own issues and, as a matter of fact, against the activity of the Communists. They weren’t happy to see us come along because we were organizing people outside of their fold. They also had an attitude toward armed struggle that was more conservative than ours.

At a certain point, the Communists recognized that we were the ones having impact in the community. So they came to us. They offered us free legal representation – we always needed lawyers – and they would contribute finances to us. And we wanted to do this, because we were Marxists ourselves.

I think at a certain point, the Black Panther Party became the driving engine for a whole phase of the [Communist] movement. So in that sense, the Communists used us. On a worldwide basis, they used us propaganda-wise.

MILLS: What’s ironic about that is that was the FBI’s excuse to go after the Panthers, wasn’t it? That you were tools of the Communists?

CLEAVER: Well, it’s not against the law to be a Communist. But when you advocate the violent overthrow of the government, or when you practice it –

You know, many people lie about what they’re doing. And we used to lie, use falsehood, when we were describing our own activity. For instance, we would go out and ambush the police. Then, if we got caught, we’d say they shot at us first.

MILLS: And that was not true?

CLEAVER: It wasn’t always true. There were many times when we would shoot first.

And I say this because it illustrates the distortions that get involved when the people hate the police because they always see the police making trouble. But a lot of times, the police are not wrong. A lot of times, people did exactly what police said they did, but then they lie about it.

I think we were in that situation in the ’60s with the FBI. The FBI investigated us and came to the conclusion that we were a dangerous group.

MILLS: Was the FBI right?

CLEAVER: I think it was right. See, the problem gets into what does the FBI have a right to do to you? Once they make the decision that you are an enemy of America, then they consider you outside the law, so they use all their dirty tricks on you.

This got them into a lot of trouble. If they could have proven that we were systematically engaging in armed struggle, then they would have had less trouble with the public over what they were doing.

MILLS: So the case could be made that J. Edgar Hoover and the FBI were justified in going after the Black Panther Party?

CLEAVER: I think a case could be made on the following points: that the FBI was not always wrong; that many of their accusations were accurate when it came to our use of violence, our use of bombs, our use of ambush tactics.

So if I would fault the FBI at all, it would be in its overzealousness in using CIA tactics on the American people. I say this because they did this to people who were not Black Panthers, or who were not involved in that kind of activity. Just people who dissented.

MILLS: There is still that kind of dissent in America. Why do you think that is?

But from that time on, there was a new kind of struggle, very controversial, with a new kind of political party which was not well understood, an international party coming in trying to change the government. That started the Cold War and what you call the “struggle for the minds of men.”

So we have in America a couple of generations of people who have grown up just hearing negative about America. This is amazing because it has a distorting impact. I think Americans have been bombarded with very powerful negative propaganda. … It has a brainwashing effect on people.

MILLS: What about black Americans? There’s nothing new about black dissatisfaction with America.

CLEAVER: I think this is one of the very serious constituents of the black identity crisis. Blacks generally don’t feel part of America. I call it a fence-straddling mentality.

Even though you don’t have a strong “back-to-Africa” movement, you do have that theme that floats around in the community. The consequence is that you have people paralyzed on the fence. They neither go back to Africa nor do they participate fully in America. So you have millions and millions of blacks who are in a kind of catatonic trance over what to do.

The strong condemnation of America, the constant criticism of America, this has fixed a certain mindset. This is the mindset I have broken with, and it’s the mindset I encounter almost universally among middle-class blacks, which is what you find mostly on college campuses: America not being their home, or America being the worst country in the world, or everything being racist. Just racism, racism, everywhere is racism – not being able to draw some distinctions and to see some good in America as well as the bad.

Very cool interview. As a recovering Pantherphile myself, I'm certainly glad that Cleaver pointed out how the fact that they armed themselves and wanted to overthrow the government gained the attention of the feds, and not so much that they were a black group.

Those black revolutionaries missed an opportunity to work within the political system in order to affect change, and in some ways we are still paying for it.

I see the US govt. pursuing a dual strategy during the '60's.

1)Buy off the black intelligentsia w/ affirmative action and stepped up enforcement of civil rights laws.
2) Crush the black radicals by any means necessary. (Any nation w/ a functioning govt is going to protect its sovereignty)

Those of us who had our acts together were better off than ever before. The angry young men in the hood were worse off than before, and the radical remnants morphed into Crips, Bloods, and GD's.

Long term result, more dead black men than at at the height of the lynching era.

Those were interesting times for sure. My father attracted the attention of the FBI because he was a sociology professor who was very involved in the anti-war movement.

The fear of Communism was pervasive in a way that seemed strange to me. As my father explained it Communism seemed to be about people taking care of each other.

That's how the Panthers were always represented to me - people taking care of each other.

He also told me that the government at that time was a bunch of rich guys who only cared about rich guys.

I guess I'm one of that generation Cleaver was referring to who was raised to be suspicious of, if not outright hate, the government.

Cleaver` s old Rolling Stone interview came as an awful shock and surprise and it was one of the reasons I did not end up as an complete comunist idiot.

To a german who grow up next door to failing communist states it is strange how strong american stalinism was and still is: Communists as people who take care of each other! God almighty!
Kronstadt, Stalin, Spain, Hungary, Maoism, Cambodia?

And the left still can`t admit that Huey Newton (like Cleaver himself!) and George Jackson were not only true revolutionaries, but also common criminals and even killers.