MBP of the Week: Chicago Tribune 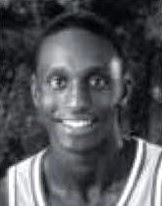 Now you guys are getting into the spirit of this thing! Alex Gordon of the group blog A List of Things Thrown Five Minutes Ago brought the following Misidentified Black Person to my attention. (Big thanks, Alex.)

The Chicago Tribune last Saturday ran a long feature – 50 paragraphs long – on former NBA player Kevin Gamble (above bottom), who returned to his hometown of Springfield, Ill., and built a basketball program from scratch at the University of Illinois-Springfield.

Only one problem. A photograph supposedly showing Kevin Gamble in his playing days wasn't Kevin Gamble at all.

This morning, the Tribune posted this correction on the Web:

"CORRECTIONS AND CLARIFICATIONS: A 1990 file photograph that accompanied the story incorrectly identified a player as Kevin Gamble. It was not; the archival information was incorrect."

Alex Gordon tells me the photo was actually of another Boston Celtic, Dee Brown (above top).

Easy mistake to make. Those Irish... they all look alike.

UPDATE (02/15/07): When it comes to being misidentified in the media, female basketball players are as vulnerable as the men. And college newspapers are as prone to screwing up as the pros.

This correction was posted yesterday on the website of Kansas University's student paper:

“Tuesday’s The University Daily Kansan contained an error. The player in the photo, with the article ‘Shaq makes big plays at the buzzer,’ was misidentified. No. 20 Sade Morris was incorrectly identified as Shaq Mosley.”
Posted by Undercover Black Man at 10:33 AM

Just for the sake of argument, does it matter what ethnicity the person is who made the mistake? Suppose the person who archived the photo is the originator of the error, and that that person is black. Does that make any difference? I'm not trying to be a pill; I'm just curious.

Could be, Dez. I, for one, not being a big basketball fan, wouldn't know Kevin Gamble from Adam.

But I would assume that the Tribune story (the print version anyway) also included a present-day photo of Gamble. The old NBA photo wasn't primary piece of art. Mightn't somebody, somewhere along the line in this process, have noticed that the old photo was wrong? Dee Brown and Kevin Gamble don't look very much alike to me. Different skin tones, etc.

It's the cumulative nature of these mistakes that interests me. Why does it seem to happen so often with black athletes, black actors, black politicians, and much less so... from my admittedly unscientifc Googling excursions... with whites?

Now, being a former newspaper man yourself David, if you were charged with completing a 50-paragraph feature on one guy, along with the requisite time and effort spent on research and interviews, how likely would this mis-identification would be a "mistake"?

Ack, sorry about the double post! Don't know what happened there!

Good to know that occasionally even white people are confusing.

This reminds of another incident that occured in Chicago (call it poorly described black man). There was a rapist in (I believe) the summer of 2002 that the local news described as "resembling the rapper Ice Cube". Unfortunately, Cube was in town at the time and it rightfully pissed him off.

sorry, I meant to say that the police issued a statement describing the man as resembling Ice Cube, and the news ran with it.