Fox with my mind 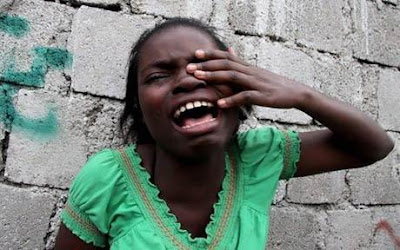 I just flew back to New Orleans from New York City on JetBlue. Cool thing about JetBlue is, they got in-flight satellite TV so I could watch cable news... just like I would be doing at home!

CNN and MSNBC, of course, are covering the earthquake in Haiti. You heard about that, right? The absolute destruction of a nation’s capital, Port-au-Prince? Tens of thousands presumed dead?

Well, when I popped over to Fox News, what were they talking about? The Republican underdog in the Massachusetts Senate race. “New ethics questions swirl around Nancy Pelosi.” “The left wing’s malicious attacks on Sarah Palin...”

And that is the news tonight from Hannity’s America!

What a sickening joke. Hannity, O’Reilly and Glenn Beck went out of their way not to mention the earthquake. Like it didn’t happen.

Either the bosses at Fox News (and, by implication, the viewers of Fox News) don’t give a shit about dead black people, or Fox doesn’t want to cover a story that is bound to show the Obama Administration in a positive light... as the U.S. government mobilizes to respond to a foreign crisis.

I hope media analysts call out Fox News for this crap. It is not a news organization! It’s a propaganda arm of the Republican Party! How can they even deny it now?

Somebody please make Roger Ailes explain why he’s ignoring the No. 1 news story on planet Earth.
Posted by Undercover Black Man at 9:44 PM

Thank you. If the late night talk show hosts can take a break from their craziness to address this issue on their shows, I don't understand how Fox can get away with nary a mention.

^ Well, at least Greta Van Susteren is leading with it.

I just watched last night's MSNBC's shows and the Nightly News. I cried all morning.

I guess your being on the flight prevented you from posting about Teddy P's passing. You're usually faster than the media with the obits.

I record the line ups of both Fox and MSNBC on a nightly basis.

While MSNBC has dedicated MORE of their evening news coverage to the situation you cannot legitimately claim that Fox is ignoring the situation.

On the radio yesterday Conservative Hugh Hewitt ACTIVELY campaigned for people to send money to (I forget the name of the group that has feet on the ground) and the Red Cross.

UBM - you are better than this man. You are reporting from the perspective of the AMERICAN MEDIA WARS. This won't do a damned thing to help a single Haitian.

I record the line ups of both Fox and MSNBC on a nightly basis.

Now tell us what Sean Hannity, Bill O'Reilly and Glenn Beck did last night to "help a single Haitian"??

And what the fuck does Hugh Hewitt have to do with what I'm talking about?

I'm British so thankfully I don't have to put up with FAUX NEWS but I was in DC recently and stumbled upon now and then and it made me sick.

^ They showed their true colors last night. Beyond all doubt. And it should never be forgotten.

It's a low down dirty shame for sure...

Daniel, sadly Sky carries Fox. So even Brits aren't immune. I just wonder if any watch it.

Well, I'm not a big fan of Sky either, as it is owned by the Murdoch beast, much prefer the BBC.

Geneva Girl - the Brits do sometimes watch Fox News...for laughs and to confirm their worst fears and stereotypes about Americans. I try telling them not all Americans are the same...wish me luck!

Rush Limbaugh claimed today that people who send money to Haiti through the White House website might not see their money go to Haiti. (Implication: Obama is going to steal it.). Of course, if you click on the link at whitehouse.gov, it sends you to the Red Cross website.

[quote]Glenn Beck did last night to "help a single Haitian"??[/quote]

They did about as much as the Hip Hop entertainment establishment BUT none of this Hip Hoppers were charged as having RACISM as the motivating factor for their "inaction".

UBM - as I waited in the dentists office for my son's appointment and watched "evil, racist" Fox News - I tabulated the amount of coverage that they gave the Haitian story and even took pictures of their coverage.

I was going back and forth between Rachel Maddow and Hannity Wednesday night. I don't know why I was surprised that the latter's show was business as usual. If Obama somehow makes a misstep during America's efforts to aid Haiti, you know Fox will be front and center with blanket coverage.

By the way, I discovered your blog via a link Field Negro included in his post about Roger Ailes.

^ Welcome, Malcolm. Thanks for commenting. And God bless Field.

I agree with you. If a U.S. Marine catches a machete in the back, you won't be able to get Sean Hannity to shut up about Haiti.

[quote]If Obama somehow makes a misstep during America's efforts to aid Haiti, you know Fox will be front and center with blanket coverage.[/quote]

I record MSNBC and Fox News extensively (I got 3 recording devices) as part of my "Propaganda Research".

Here is my standard observation:

The key difference between the ANTICS of Democrats (Progressives/MSNBC) and Republicans (Conservative/Fox News) is that the Democrats has more Black people supporting them that they are able to label more of their antics as RACIST.

I will soon post a video in which "Al Jezeera English" (shown on LinkTV) is interviewing a Haiti expat about him connecting up with his Haitian relatives after a desperate search. The NEWS ANCHOR then asks the question "It must have been disconcerting to you today to hear that former President George Bush has been assigned to co-chair the American relief for Haiti?".

I was glad to see that the guy didn't take the bait.

Then in a second session Rachael Maddow is grieving over the same thing. She says that it was "BUSH WHO BOTCHED THE RESPONSE TO HURRICANE KATRINA".

Sadly and Ironically both of these areas suffer from the same force that has exacerbated the grief of the HUMAN BEINGS who live there.

This has allowed LEFTIST BIGOTS to make merry over some notions that the FAILURE of these people is resident in the 5 or 10 days after the terminal event rather than the long running dysfunction of being in a land who's engineering and proximity to water hazards left the people at grave risk.

(Indeed as well the Conservative who is inclined to do so is able to exploit stereotypes of looting and chaos.)

Few people can articulate the response they EXPECT prior to the crisis happening and then judge the response according to their pre-existing standard. AND have this standard vetted that it is even humanly possible in the first place.

Woe is the being who is otherwise disconnected from the mainstream of society but who makes a good political football for use in the battle between left and right. (Malcolm X called out the same phenomenon more than 45 years ago)

god bless field, too. but the reason he linked to this post is because i did it in a comment yesterday on his blog item from wednesday night.

so i'd say god bless david, too.

but i'm in atheist, so i didn't say that.

david--sorry, i think i brought CF over here, too!

I'm a Brit and l used to have bad bouts of insomnia so l used to be up watching tv and Faux "News" was on. It was like a car crash, l couldn't look away!!

Faux "News" did seven minutes in total on this in total compared to reporting from other cable channels.

try to defend them if you wish but they are exposed for what they are, the media arm of the republican party.

^ Indeed, anon. It's not just that they ignored the earthquake. It's that they spent the time with "business-as-usual" political attacks and partisan spin.

i also tipped prince. he has a link to this blog. did you see it?

God bless you too, maria!

^ Trip part is, I beat Media Matters to the punch... and they bash Fox for a living!

btw, forgot to say congrats after you posted the treme teaser. can't wait!

btw, how is all this money for haiti playing among the people of NOLA who are still so in need?

Rush Limbaugh claimed today that people who send money to Haiti through the White House website might not see their money go to Haiti. (Implication: Obama is going to steal it.). Of course, if you click on the link at whitehouse.gov, it sends you to the Red Cross website.

Roger Ebert has a response worth reading:

Rush is such a dick.