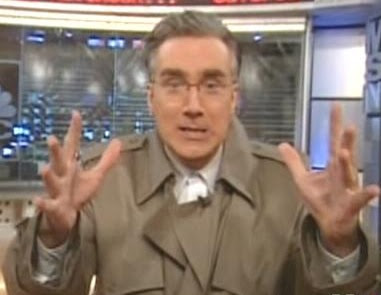 But never, ever could a character say goddamn.

By the standards of primetime broadcast television – and I don’t think this has changed since the 1990s – the word goddamn is considered profoundly offensive to many Americans.

MSNBC’s Chris Matthews and Keith Olbermann need to check themselves.

And tonight, Olbermann referred to “one of those goddamned ‘water-the-tree-of-liberty’ T-shirts.”

Matthews at least was caught up in a moment, whereas Olbermann taking God’s name in vain seemed deliberate. Telepromptered even.

I know it’s too much to expect either of those jackasses to apologize for their unprofessionalism. Can’t imagine they regret the offense they might’ve caused to viewers who don’t wanna hear that kind of language on a “news” channel.

But shit, dudes... if you can’t roll with the commandments, at least try to remember the main hustler’s rule: Don’t blow your cool.
Posted by Undercover Black Man at 9:10 PM

hello, david...did you ever use the word "dickweed?" you may be aware of a former UF classmate of mine, dennis kneale, who has been on a tirade against bloggers and called them dickweeks on cnbc.

^ I don't remember that being in our repertoire... but it might've been. I think any variation of "dick" that didn't refer to an actual penis -- like, say, "Don't be a dick" -- we could use.

I think dill weed is an actual plant. Dick weed, perhaps, is a superlative. Perhaps, a really, really persistent dick.

I did like keith but he is starting to go a little overboard and starting to appear phony in his actions.
I don't like the word either.Mt Grandmother use to say " when you use a cuss word it is because you have nothing intelligent
to say"
Until to day my srtongest word is Damn!
Love your blog Brother.

The moderate guy at Fox (I forgot his name) said, "We don't fucking torture!"

Olbermann and Matthews do need to clean up their potty mouths, but I usually agree with them.

MSNBC is clearly partisan. It's a counterpoint to Fox. I download Olbermann and Maddow every day, but I don't pretend that they are unbiased. They are. They express, for the most part, my point of view and that's why I watch them.

I'm bored to tears watching CNN International. And, the BBC drives me crazy especially because their reporters consistently mispronounce American names and places. (What one reporter did to Sotomayor's name was a crime.) I do, on occasion, watch Al Jazeera, but mostly for international news.

UBM, you're aiming for a "Worst Person In The World" spot if you keep this up! By the way, is Olberman supposed to be pretending to be Peter Finch in Network in that still? Does he not realize that the movie was actually making fun of irrational jackasses like him and O'Reilly and the broadcasters that air this type of trash "news" (not to mention the TV viewers that blindly follow these dopes like lambs to slaughter)?

I agree GD should never be uttered. Especially not on the "News".

I curse like a sailor, so I have to watch what I say in public, but Motherf*cker that's another story. Everything sounds better with an MF in front of it.

I used to get paid to police the language. "Jesus Christ!" is on the list too.

Are you arguing that because goddamn is offensive to more people it is therefore a worse word?

^ Read my joint again, Biggie. And dwell thoughtfully over the word "unprofessionalism."

Ummm...UBM, didn't you say you were an atheist or something? You sound like your feelings are hurt, lol.

^ I'd make a good Christian except for the believing-in-God part.

if you haven't seen this, it's hysterical.

^ I'd make a good Christian except for the believing-in-God part.

"Hardball" is a habit that I'm trying to quit.

And Keith-o can be tough to take at times but he's usually entertaining. And not lying. Which counts in cable TV punditry.

^ Check this out though, blackink...

Has Olbermann ever... ever... interviewed someone with a contrary political perspective? Would he even know how to deal with a conservative... whether to challenge him or her face-to-face, or to challenge his own preconceived notions?