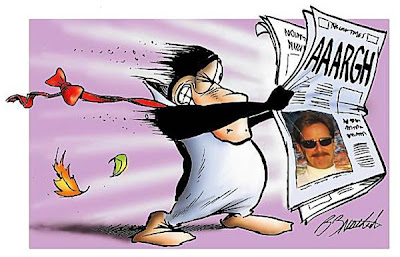 If we were to carve a Mount Rushmore in honor of cartoonists who brought hipness to the funny pages... there’d be no debate about which four.

Trudeau revolutionized comic strips during the 1970s with “Doonesbury.” The ’90s belonged to Watterson’s “Calvin and Hobbes.” In this decade, McGruder’s “Boondocks” was the bomb.

But do you remember “Bloom County”? That one was blazing hot in the ’80s.

Nowadays, Breathed creates children’s books and is trying to get something cooking in the movie business. But I look around the internets and see that plenty of folks are still feeling “Bloom County.”

Matter fact, the entire run of “Bloom County” is being republished in book form, starting in October. 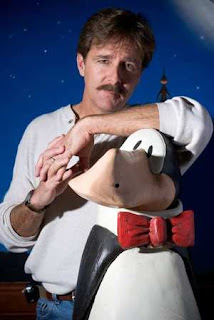 Breathed is often described as a “reclusive” guy who rarely gives interviews. Well... I interviewed him by phone in 1982, when I was in college. (I briefly published a campus magazine called This Magazine).

I’m posting an edited transcript, for the benefit of all Berke Breathed fans online. Part 1 covers his general view of the daily funnies; Part 2 will focus more on “Bloom County.”

At the time we talked, Breathed was 25 years old... just three years out of the University of Texas, where he’d created a comic strip called “The Academia Waltz.”

DAVID MILLS: Back in college, what did you figure you’d be doing now, three years after graduation?

BERKELEY BREATHED: Probably up in the Tibetan mountains taking pictures for National Geographic.

MILLS: Do you have any formal training in drawing?

BREATHED: I don’t have any art background. I’ve always just drawn for fun. And in college, it became a tool for this.

I’m more of a writer than an artist. I mean, there’s not that much art involved in drawing a comic strip, especially nowadays.

That’s the only criticism I would have of comic strips nowadays. I wouldn’t say anything other than the fact that since the days of “Li’l Abner” and “Pogo” and such, the artistry in comic strips has declined rather depressingly.

MILLS: Do you think the comics pages are now more of a forum for writing, then?

BREATHED: To tell you the truth, there’s not that much about the comics page even worth talking about. I don’t read it. I never have.

MILLS: Even now you don’t read the funnies?

BREATHED: There’s nothing to read. What am I going to read? “Blondie”? You know? This stuff is 50 years old.

MILLS: When “Bloom County” first started, people noticed a striking similarity in style with “Doonesbury.” Was “Doonesbury” an influence?

BREATHED: Sure. Obviously it was. I probably wouldn’t have gotten the idea not to use those ridiculous word balloons without seeing that he didn’t have to.

In college I was exposed to “Doonesbury” because it was on the editorial page every day. But before then, anything close to comics that I really read were Feiffer and underground comics, and they had an influence on me as well.

Some people might think that “Doonesbury” is the only strip that’s influenced me. But I would say that editorial cartoons have influenced me more than anything else, at least in drawing style.

BREATHED: Where have you seen that?

MILLS: I don’t remember exactly which paper, but I have seen “Bloom County” on the editorial page.

MILLS: This is news to you?

BREATHED: Well, I know that it happens sometimes. I never see the newspapers that I’m printed in.

It is too bad. It’s just a chickening out of the paper. For some reason, there’s this unwritten rule that you can’t say anything relevant or intelligent on the comics page or it upsets everybody. So they feel it’s safe to put it on the editorial page.

Well, that’s silly because the most famous and the most classic of all strips through the history of comics have always been socially commentative and politically reflective. They were just doing it in a little more subtle manner.

I think the papers are just being weenies about the whole thing.

MILLS: Is it true that papers won’t let you write about a couple living together outside of marriage?

And sometimes they don’t agree with me as to what is perfectly permissible with most of the editors out there. And we’ve had some conflicts before, but we basically don’t anymore.

In the beginning, I couldn’t put the term “living together” in the strip, which we had problems over. But I don’t think that would happen now.

MILLS: Are there some topics that you yourself would not write about, even if you had free rein?

BREATHED: The only thing I’m not doing that I could if I was still in college doing cartoons – if this doesn’t sound frivolous – there would be more indirect sexual content. But nothing that could be construed as dirty.

Just the fact that I’m supposed to ignore that people have romantic relationships in this world is a little bit silly for the comics page.

But that’s the way it is, and I’ve accepted that. And I knew about it going into the business.

Basically, I can pretty much do what I want. Other people throughout comic history have paved the way for this kind of material. It would be a lot tougher if they hadn’t been there first.

MILLS: Let’s get back to the comics page. What do you think the daily comics should be?

BREATHED: ... I would expect to see more raw talent on the page. It doesn’t seem to be an area that people who have a great deal to offer – literarily or artistically – head to. I think they go in other directions.

Besides the quality stuff that is there – obviously there are some good cartoons – on the whole you’ve got a lot of cartoons left over from 50 years ago that syndicates are still trying to pump life into.

A lot of the new people coming up have no reason – artistically and in other ways – no reason to be there. They should be doing other things.

It’s not that hard to have a hit strip. All you have to do is come up with the right formula and one or two characters that are easily identifiable to a specific and esoteric group in society, and you can develop quite a following without even having to be very funny.

I guess you can tell I don’t have a great deal of respect for the comic strip as it exists now.... The comic pages have just not ever demanded a great deal of excellence.

Posted by Undercover Black Man at 7:15 AM

my brother loved this cartoon. he used to draw all the characters. he had books and whatnot all over his room.

I remember that interview. I used to dig your column in the Diamondback too.

Thanks for putting this up, UBM! Looking forward to the rest.

the mount rushmore would have the boondocks guy but not charles schulz. right. schulz probably seems bland to you, but that's just that your own view isn't recognizing the advances he made. comic strips weren't talking about depression, psychoanalysis in the 50s. there was not dry humor in the strips either.