A question about Byron Allen

Has anyone ever been on TV so long without people giving a shit? Seriously, who goes out of their way to watch Byron Allen? And yet, there he is on TV. 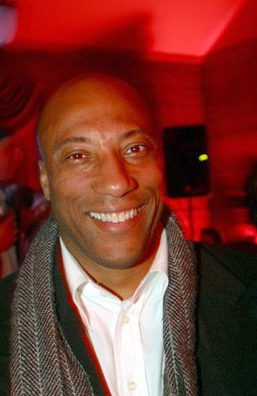 And whenever I stumble upon him, I say to myself, “Dang. That corny muhfuggah still on TV?”

’Twas 30 years ago that Byron Allen – at the tender age of 19 – got his breakthrough gig as co-host of NBC’s “Real People.”

On “Comics Unleashed” last night, Byron Allen said that as a 14-year-old, he was writing jokes for Jimmie “J.J.” Walker... along with David Letterman and Jay Leno. (Letterman and Leno got a weekly salary; Byron Allen got $25 per joke.)

That’s very cool. But Byron Allen’s success isn’t about being funny. It’s about being a brilliant businessman. Because he owns his current shows. And he produces lots of other time-filling “content” for TV and the worldwide internets... such as “Beautiful Homes & Great Estates.”

I found an interesting YouTube clip by a young cutie-pie named Chanelle, who shared her experience of being an audience member at a “Comics Unleashed” taping. (Turns out the studio audience gets paid!) Check this out:

Posted by Undercover Black Man at 10:41 AM

Just a rhetorical question are you really a whiteman masquerading as a blackman?

I see Comics Unleashed after Craig Ferguson. Haven't seen most of the others, though I've seen the one with all the press junket interviews.

It's cool that he's doing as well as he is. Always wondered what his deal was. More power to him.

Byron Allen has obviously latched onto the trickle down theory. That boy has that shit on lock. I can assume we will not see him on a list of "brothas that lost millions", oh no, this man has been steady as it goes. I am reminded of the Turtle & The Hare. ol'Byron doesn't move to fast but he's in the race. My hat is off to Byron Allen, even if we don't know who the hell he is. I know he's a brotha with steady loot and that's always on and poppin'. I don't know why but I've always wondered if he has a white wife?

We're so on the same page with this. Every time I see him on tv I feel like I'm being Punk'd. Consistently corny for YEARS.

Also, wasn't there a skit on In Living Color that made fun of him? Does anyone remember that?

I love Byron because he made up for his marginal talent with INSANE work ethic, put his ego aside and "got in where he fit in", which is at 2 in the morning or thereabouts. He's made more money than more comics and no one can criticize his business skills. It's low rent, but it more than pays the rent.

I thought it was only me who noticed that Byron Allen is still plugging away at it in the dead of night. Somewhere.

I mean, he doesn't make guest appearances anywhere. He never turns up in the tabloids. But he's on TV all the damn time.

It's unreal. He's pretty much figured out that elusive formula for being famous without being a celebrity, if that makes sense.

Hats off to the brother.

CareyCarey, yup she is. Very blonde.

I heard somewhere that he will call up the Playboy mansion to hook up.

Now A. this is just gossip and B. this was before he was married.

As such I don't even know if it's true, but I wish it was. If I was Byron Allen, that's what I'd do!

What Would Byron Allen Do, WWBAD?

Ok here is the real link to the article about him and his wife.

"But Byron Allen’s success isn’t about being funny. It’s about being a brilliant businessman"

I have ALWAYS said that about him. And yes, he is corny as hayell, but he does seem like a nice dude (suspected Playboy hookups and all).