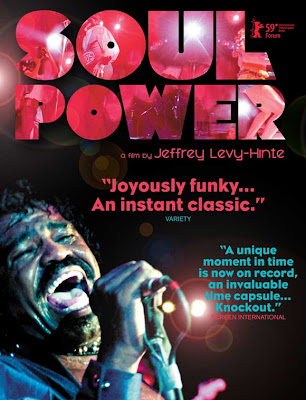 Yes, I do plan on seeing “Bruno.” But my first order of business this weekend was checking out the documentary “Soul Power,” which opened today in a handful of theaters in L.A. and New York.

A companion piece to “When We Were Kings,” “Soul Power” focuses on the three-day music festival scheduled to coincide with the 1974 Ali-Foreman fight in Zaire.

Drawing from many hours’ worth of precious footage, director Jeffrey Levy-Hinte has prepared a joyful meal of a movie. But he takes his time in setting the table.

A third of the movie is over before the first concert scene (the Spinners doing “One of a Kind Love Affair”). I would’ve preferred less behind-the-scenes stuff about the construction of the stage, for instance, in exchange for a couple more music performances.

The performances are thrilling... building up to James Brown and the J.B.’s roaring through “Payback” and “Cold Sweat.”

Quite a coincidence that “Soul Power” would open on the very day that President Obama arrives in Ghana. Because the sight of Muhammad Ali and James Brown in Africa evokes the same sense of cultural magic.

Here is the trailer:

just curious, why do you want to see bruno?

^ I think Sacha Baron Cohen is one of the greatest living satirists.

From what I've read about "Soul Power," it features no, or very little, footage of the African musicians that performed at the concert. That really chaps my ass!

The movie can only be so long, and the target audience most likely is more interested in seeing BB King and Bill Withers than Tabu Ley.

I haven't seen the movie yet, but from what I've heard, they did the best they could with the time they had...

Actually, John, there are a few pieces by African artists: "Simba Nkoni" by OK Jazz; "Seli-Ja" by Tabu Ley; "The Click Song" by Ms. Makeba.

There's also a great clip of Manu Dibango playing his saxophone in the streets of Kinshasa, with a bunch of kids gathering around him Pied Piper-style.

Wanna see this one, for sure.

I wanted to see this when the film festival was in town last month, but I the times never fit my schedule.

I, too, am toying with the idea of seeing Bruno...possibly only becuase the Washington Post gave it an interesting review yesterday.

I saw this movie (or a version of it) when I was a kid. It was called SOUL TO SOUL and Ike and Tina Turner (along with James Brown) were the performers on the red, black and green poster.

I presume this is a recut of that film.

^ Actually, Reg, "Soul to Soul" was a different movie (which I hadn't heard of). James wasn't in that one... but Wilson Pickett was, along with Santana, Roberta Flack, Les McCann, Mavis Staples and Ike & Tina.

So don't pass on "Soul Power." This footage was in a vault until the 1990s. I bet it took 'em all this time just to clear the music rights.

Any performance footage of Phillipe Wynne is must-see unto itself!

^ Philippe was a bit of a clown, too. There's a scene of him play-sparring with Ali in a boxing ring... gloves and all.

I was hoping for this kind of documentary since watching "When We Were Kings." Looking forward to owning it one day since I'm sure it won't make it here in Denver.