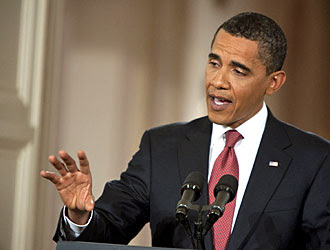 5:13 p.m. (Pacific Time) – When President Obama promises that his reform plan will “keep government out of health-care decisions”... and that reform will “not be paid for on the backs on middle-class families”... he is acknowledging the profound problems inherent in the concept of socializing medical insurance.

Now we can debate whether or not those promises he just enunciated make any sense...

1) If the government “limits” the amount of money insurers can “force you to pay out of your own pocket,” and;

2) If “no insurer will be able to deny you coverage for a preexisting condition,” then...

And if private companies get out of the insurance business, does that mean the U.S. government will become the only player in the game?

Will “reform” be a side road towards a single-payer system?

5:57 p.m. – I am amazed that Obama answered the Skip Gates question... and especially to say the Cambridge police “acted stupidly.” That’s gonna suck a lot of attention away from health care, which was supposed to be the President’s focus. ...

6:17 p.m. – Actually, I’m a little cheesed off that Lynn Sweet even asked him about Prof. Gates. Is Barack Obama the Negro-in-Chief or the Commander-in-Chief?

7:08 p.m. – MSNBC’s Chris Matthews just echoed a point I made here on Sunday.

Regarding the press conference, Matthews asked, rhetorically, whether President Obama had explained why we need to change the health-care system, what those changes would be, and how America would pay for it.

“It’s not clear to me,” Matthews said, “that he did any of those things.” Whoa.

8:13 p.m. – Even MSNBC’s Ed Schultz – Obama’s biggest cheerleader on a channel full of cheerleaders – says the President’s performance tonight was too “passive.”
Posted by Undercover Black Man at 5:13 PM

UBM, surely you jest? President Obama is currently viewed as the Negro-in-Chief, however, this is just the first phase...

Everyone knows he was born in Kenya, shipped to Hawaii, given to a white family, and groomed to take over the world.

Part of his training, (at the One World camp) consisted of learning the ways of black people in the U.S. while remaining non-threatening to whites. Once installed as the President, his mission is to turn the U.S. into a welfare state benefiting blacks at the expense of whites.

Of course the race war that follows will leave the U.S. vulnerable to outside forces - radical muslims. A religious war will ensue leaving the citizens of the former United States of America bereft of hope. They will turn towards secularism and the result will be a move towards...

It's all part of the plan. Mike Savage called it two years ago.

What? Ya fadin on ya boy?

On the Gates thing. The takeaway here is not, "Don't abuse black men." Most black men are working class, and you can still do pretty much what you want to them as long as you take the time to get your story straight.

The takeaway here is, "Don't fuck with rich, well connected Harvard guys who live in upscale neighborhoods." Meet the new boss, same as the old boss.

But he was...so...um...cute.
Maybe he'll bust out the heavy stuff here in Cleveland. Like come on stage to Rick James "Mary Jane" and make the P-funk sign, hee hee.

But he was...so...um...cute.
Maybe he'll bust out the heavy stuff here in Cleveland.

Cute he may be... but on this issue, Prez has run up against the natural limit of what style alone can accomplish.

Because substance-wise, Obama was shaky as hell last night. Health reform is probably the most complicated economic and political issue in America. And he just ain't in command of it.

Obama has a gift, but it's bad when Matthews isn't feeling that thrill running up his leg.

I dunno maybe Obama can blame Bush or something?