Booker T. and the NAACP

This being the 100th anniversary of the NAACP, it behooves all history geeks to explore the fascinating early years of America’s preeminent civil rights organization. Especially the shift in power away from Booker T. Washington’s brand of non-confrontational race politics.

In 1909, that power shift was a delicate business.

It’s no secret that the NAACP was founded and led by well-born white liberals. One of them was journalist Oswald Garrison Villard, grandson of the abolitionist William Lloyd Garrison.

Villard’s father, Henry Villard, was railroad rich... and he owned the New York Evening Post and The Nation, which provided a platform for young Oswald’s political writing.

A self-described “radical” when it came to the Negro question, Oswald Villard authored a “call” to meet – signed by 60 prominent blacks and whites – which would result in the formation of the NAACP. This meeting was labeled the National Negro Conference.

In planning that meeting, Villard was in a tricky spot. How could there be a “Conference on the Status of the Negro” without the most influential black man in America – Booker T. Washington – taking part? Prof. Washington rubbed elbows with U.S. presidents! 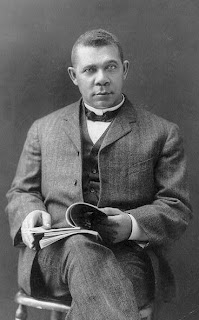 Villard “realized that Washington could have little influence with a gathering of men and women such as were behind the coming conference,” according to NAACP historian Charles Flint Kellogg.

Complicating this ideological schism was the fact that Oswald Garrison Villard had been a friend of Prof. Washington’s and a supporter of his work at the Tuskegee Institute.

Here’s an excerpt from Kellogg’s “NAACP: A History of the National Association for the Advancement of Colored People” (1967):

CHARLES FLINT KELLOGG: A few weeks before the conference, Villard visited Tuskegee to talk to the students. He felt that he was much too radical and outspoken for Washington’s comfort and that Washington disapproved of what he said.

[Villard] was critical of the school. He complained of its lack of coordination and of the need for expert educational supervision and deplored the “essentially commercial” tone. ...

Although Villard never broke with Washington completely, his growing relationship with the more “radical” group [of black activists] contributed to his disillusionment. ...

Aware as he was of the presence of two factions in the Negro world – one headed by Booker T. Washington, the other by Atlanta University Professor William E.B. Du Bois – Villard was nevertheless determined not to let this controversy interfere with the conference nor with the formation of a permanent organization.

It was in this spirit that he wrote a frank but cordial letter to Washington, inviting him to attend the conference, but tactfully making it possible for him to decline.

It was not to be a Washington movement or a Du Bois movement, he explained. It was to be an aggressive organization, ready to strike hard blows for the rights of the colored people.

Because of Washington’s educational affiliations, Villard understood the delicacy of his position. Washington would be welcome at the conference, but his absence would not be misinterpreted.

In turning down the invitation, Washington showed insight not borne out by his subsequent actions. “I fear that my presence might restrict freedom of discussion and might, also, tend to make the conference go in directions which it would not like to go.”

Interesting post and great information regarding Villard. The relevance of the organization was questioned in the comments section of your other recent post about the NAACP.

With missteps such as the burial of the "N" word, and R. (that ain't me takin' a leak on that child) Kelly being nominated for an Image Award, the organization is deserving of criticism.

You are right, UBM - there was a time when the NAACP was considered part of the vanguard. It's important that we not only remember that, but hold the current leaders to a higher standard.

Booker T. receives a lot of flak for being the Uncle Tom to W.E.B.'s field negro. Sort of like the Martin Vs. Malcolm debate over who was more radical. What people don't realize is that there was a time when W.E.B praised "The Atlanta Compromise" speech.
It was years later that he wrote "The Souls of Black Folk" and deconstructed Mr. Washington's ideas.

Also, Mr. Washington was able to (during a time when lynchings were common) guide a school situated in the deep south to incredible heights. It is an achievement in and of itself that the school was not burned to the ground and still stands to this day.

What difference does it make if Dubois supported Washington initially. That's like the NOI trying to add to it's legitimacy by saying that it was only after Malcolm opened his eyes that he left the NOI.

I respect Booker T. Washington purely as a tactician. He was a cut-throat when it came to maintaining power and his every word and action was geared towards that. Dubois was no Malcom X, but I think what separated him from Washington was that he didn't just say and do things purely to gain power. Booker T. Washington didn't actually believe in many of the things he was saying. His statements were calculated meet a specific end, pure Machiavellianism.

The NAACP has always been criticized. They may have had good intentions, but they were constantly making blunders to detract from their efforts. The white leadership flat out refused to put black people in decision making positions for most of the organizations existence. There are racial motivations behind much of what the NAACP did that are debatable.

When dealing with people like Washington and organizations like the NAACP I think it's much too complicated to reduce it to a simple good vs. bad situation. Booker T. Washington may have wanted to look like he was turning down an invitation for altruistic reasons, but if you're familiar with how he operated you know he was looking out for himself.