‘Where were you when you heard the news?’ 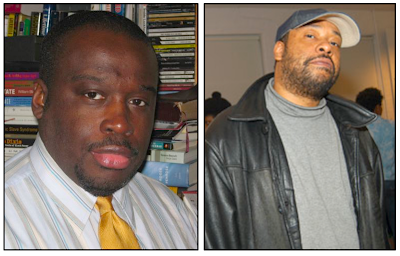 There’s a generation of African-American culture writers – journalists, critics, authors – who owe their professional success to hip-hop. They documented that cultural revolution in real time.

But those writers, now in their 40s, grew up on ’70s soul music. And they kept an ear on the larger world of pop.

For that generation, the passing of Michael Jackson has an impact greater than the loss of James Brown, Richard Pryor... any other entertainment icon you can think of.

These black writers have childhood memories of Motown 45s and LPs. Jackson 5 records were probably among the first they bought with their own money. Maybe they unwrapped one or two under the family Christmas tree.

Their high school and college years coincided with the nuclear blasts of “Off the Wall” and “Thriller.” They rode along on Michael’s entire journey as contemporaries. And so Michael belonged to them.

Two such writers – Harry Allen and Michael Gonzales (pictured above) – shared their thoughts and feelings about Michael Jackson on the radio last Friday. This happened on Harry Allen’s weekly program, “Nonfiction,” on New York’s WBAI.

I’m streaming an 8-minute excerpt on my Vox blog. Click here to listen.

If you want to stream or download the entire hourlong show, follow this link to the WBAI archives and look for the June 26 episode of “Nonfiction.”
Posted by Undercover Black Man at 8:28 AM

I'm downloading the entire show. Thanks for the link!

My flashbulb memory. I was on the L train on the way home when I got a text message. I just stared at it. It didn't look right, didn't seem real. I had a couple of other texts about the news.

Michael is a great storyteller that always brings up a lot of flashback memories...when I first read him, he brought up about 90% of my memories of when I spent summers with my relatives in New York and Jersey as a kid, and his thoughts on Mike are very much on point.

This must be the first major event that many people heard about first via text message.

I was on the Internet (of course), with MSNBC on in the next room. I heard David Shuster interrupt regular programming with the news that MJ had been "hospitalized."

Jumping around the Web, I soon came across that chilling TMZ headline: "Michael Jackson dies."

I kept hoping that TMZ had jumped the gun...

Great clip. Like Invisibe Woman said, very much on point. When they touched on how Michael's record sounded better than anything new out today, to me they were right on. Whether naturally or by design, Quincy & Michael produced some of the most timeless music ever, nothing dated or sounding stuck in its era.

Michael Jackson had some powerful mentors in Quincy Jones, Diana Ross, Berry Gordy, etc., who helped to mold him to become what he is know for today, the Greatest Entertainer of all time; and the one thang I personally find ironic is that they all outlived him.

I aws sittin' on the dumper when I heard that Billy Mays died. Too bad MJ didn't realize that Dilaudid & Demerol aren't recreational drugs.

^ Um, thanks for that visual.

I don't know if it is fair to say that MJ was using the drugs you noted for "recreational" purposes. They may have been abused, but it appears that he was taking them to ease the pain of previous injuries.

I am already tired of Johnny Come Lately slugs who now profess all kinds of love and admiration for MJ reminds of white folks after MLK died he was a good negro and colored then of course before that whites hated MLK...

I sense the same shit happening now especially with Black bloggers and punits many like UBM who for years trashed MJ....