The Los Angeles Times is reporting that Michael Jackson was “rushed” to UCLA Medical Center this afternoon.

Reportedly, Jackson wasn’t breathing when paramedics arrived at his rented home in West Los Angeles, responding to a 911 call.

2:54 p.m. (Pacific Time) – This is serious, y’all. TMZ.com is reporting that Michael Jackson has died of cardiac arrest. ...

3:23 p.m. – The Los Angeles Times has just reported that Michael Jackson has died at the age of 50. 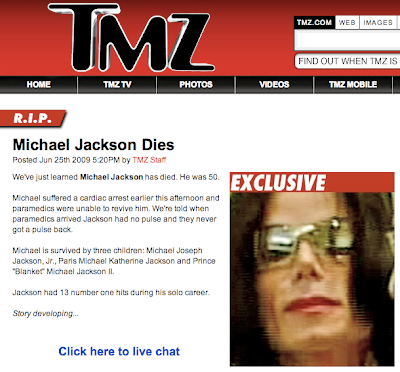 Damn, today might be the biggest double-celebrity death ever.

What a terrible shame. He definitely was a strange man, but very, very talented. I still break out "Thriller" every once in a while and it still sounds good to me.

Well he is deceased now!

Long live the King of Pop!
I rocked Thriller and Off The Wall long
past their shelf date in High School,
and still give those albums much play
now.