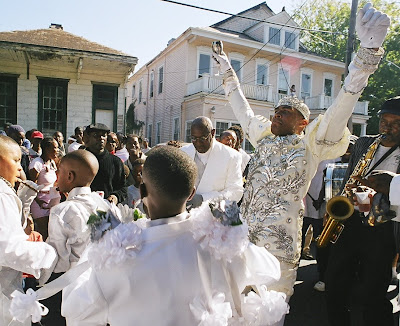 Want to learn a little something about the Tremé neighborhood... ground zero of the black music culture of New Orleans?

Check the schedule of your local PBS station for a new documentary called “Faubourg Tremé: The Untold Story of Black New Orleans.”

In some markets, the show has already aired. In others, it’s coming up soon. WHYY in Philadelphia will broadcast “Faubourg Tremé” Thursday night at 10. Washington’s WHUT will show it next Sunday at 8 p.m.

Wynton Marsalis has lent his name to “Faubourg Tremé” as an executive producer. But the film was written and co-directed by Lolis Eric Elie, a New Orleans journalist and book author.

Here is the trailer:

I was just in New Orleans this weekend. Thanks for the info. on this. I'll search for it via Netflix and order.

dang z how are you going to visit after i leave? lol

ubm you getting your juices flowing? i'm looking forward to seeing what the show will be like.

I'd heard about this project. I def want to check it out.

Nice post, I see great minds think alike. I can't wait to see the doc when it screens this weekend in the Bay Area.