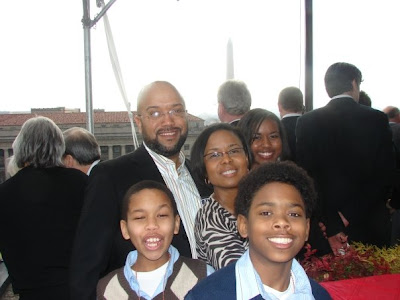 I usually don’t brag on family... but my nephew did Inauguration Week right. That’s him and his wife ’n’ kids on the balcony from which they viewed the inaugural parade.

My nephew also got hooked up for several balls and parties. He dapped up Mayor Ray Nagin of New Orleans... and even introduced himself to Aretha Franklin. (Dude is not shy.)

At some point during the several days of hoopla, my nephew’s firstborn son turned to him and said: “Dad, you a baller.”
Posted by Undercover Black Man at 9:08 PM

Brag on Brother... That photo is a shot for the History books!
And “Dad, you a baller.” That could be the "ultra" compliment!

Brag on! He's a stand-up kind of dad with a beautiful family. Congrats to him and his family for being able to witness history up close and personal.

And “Dad, you a baller.” That could be the "ultra" compliment!

I can imagine no better moment for a dad, intrepid, than when your son tells you you're cool.

So he braved running into Aretha's hat, huh?

I live right here in Maryland and watched from t.v.

"I can imagine no better moment for a dad, intrepid, than when your son tells you you're cool."

....and it's not because you're the neighborhood Weed guy.

Been gone awhile, but most def had to come in and dap u on this one.

Damn, I haven't seen him in YEARS! Here it is, I thought Facebook and Montel brought people together. Little did I know Undercover Black Men can too!

Thanks for the photo!

How amazing to be able to take your kid along on a day like that. Lucky!

And Aretha's hat was WICKED!

^ Welcome to my spot, Jacq. Thanks for commenting.