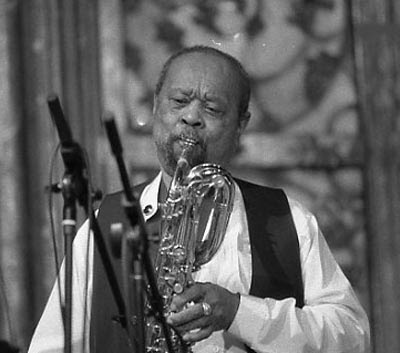 The mysterious William B. Lawsha – a.k.a. Prince Lasha – was a free-jazz player whose reputation among fellow musicians far exceeded his popular fame. He played the flute, clarinet, alto sax and baritone sax.

Prince Lasha passed away on December 12 in Oakland. His funeral was today.

A teenage friend of Ornette Coleman’s in Fort Worth, Texas, Lasha started out on alto. He befriended Sonny Rollins and John Coltrane early in his career. Lasha would record with Eric Dolphy and, perhaps most notably, with Coltrane’s rhythm section on the 1963 LP “Illumination!”

Click here to hear “Nuttin’ Out Jones” (a Lasha composition) from that session. Lasha blows fire from his clarinet.

Prince Lasha only made a handful of albums as a leader. The easiest one to find for downloading is “Inside Story,” a 1965 recording featuring Herbie Hancock in his youthful prime. Click here to hear “Kwadwo Safari.” Lasha starts on flute before switching to sax. 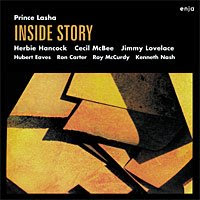 (Amazingly, CBS Records wouldn’t release “Inside Story” when it was made. The German label Enja put it out in the ’70s.)

The virtual disappearance of Prince Lasha has been a longtime riddle for jazz fans. Seems he spent the ’80s and ’90s as a real estate agent.

Saxophonist Odean Pope collaborated with Lasha on a 2005 disc called “The Mystery of Prince Lasha.” Even before that, Pope had composed a tribute to him. Click here to hear Pope’s 1999 track “Prince La Sha.”

To read a long and interesting biographical interview with Prince Lasha from 2005, follow this link to AllAboutJazz.com.
Posted by Undercover Black Man at 8:35 PM

I,m the unspoken of son of prince lasha i,m RONNIE STARR i,m on his record labels license as vice president... i and his long time friend alistarr mckloskey will be contacting the necessary people for arrangements i,m pissed cause m,y fathers dead and i didnt even know until it was to late and missed the burial ...further more i don,t even know what happened ..if or Shauwnette moffette is out there someone get him my number he knows who i am 620 222-1373 anybody with any info for me please call anytime i,m on the west coast in oakland p;ease and thank u father and god for your music i will carry it on untill were together again

That was some baad ass shit, Dave. That's one of my favorite jazz sounds, too. Love that. Gonna order some as a Kwanzaa present to myself. Thanks dawg.

^ Chuck da Fonk! Welcome to my spot. I remember you from the old rec.music.funky days.

Mister star Your post is in the porest taste,you do a grave dishoner to the memory of this great and loved man and your gread and selfish motives prevented you from saying anything worthy of this mans memories,I like anyone who knew and loved the man will miss him dearly and carry his memories, all the laughter, all the dreams he shared close to our hearts and not like some type of pig use a message board about his death as a way to blow your own horn, shame on you and I am sure you will receive all you have EARNED , I miss you prince Steve

I'm the granddaughter of Prince Lasha. I will miss him very much. however I did get the chance to spend time with him before he passed. I will forever have the memory of when he told me:"Listen to take time to feel". I will never forget his smile and his positive attitude even wile in the hospital. He was a fine man. I'm so glad I share his blood.

^ Thanks, LaToya. My thoughts are with your family.

Dear Sweet Prince, I miss you so and will always live with the new spirit you shared with me. I listen to your music daily. My sincere condolences to everyone who loves you. We all will miss your beautiful style and elegance.
Chinadoll