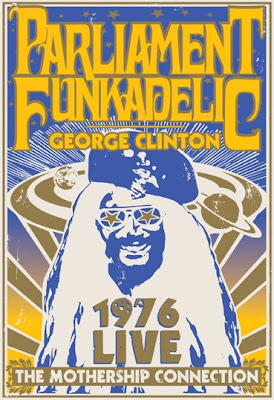 Today it’s back on store shelves again... with the title “Parliament Funkadelic: The Mothership Connection Live 1976.” Follow this link to see an 8-minute clip of George, Bernie, Maceo and the whole damn crew jamming “Undisco Kidd.”
Posted by Undercover Black Man at 9:18 AM

Now I wish the Independent Lens documentary "Parliament Funkadelic: One Nation Under a Groove" becomes available. I saw it on PBS and I think it was posted on youtube or google video.

I remember my boy, Thomas Sayers Ellis, me hold his copy of that tape for like three years. What a guy, hunh?

bklyn6, saw that doc on youtube. Saved it my favorites. But that one was the absolute bomb!!

Wow,was just watching this the other day.

Hopping onto that MyFunk joint has caused me to dip deeper into the pool of P,than I have in years.

Parliament Funkadelic was one of my favorites. Thanks for sharing this information.