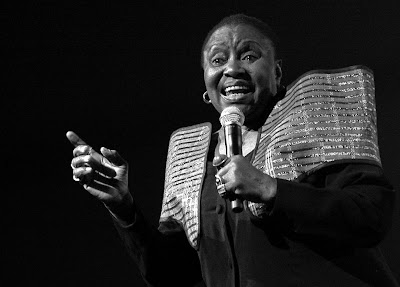 Miriam Makeba – the most widely acclaimed singer from the continent of Africa – died last night in Italy, where she had just performed at a benefit concert. She was 76.

Born in Johannesburg, South Africa, Ms. Makeba gained national attention during the 1950s as a featured vocalist with the Manhattan Brothers.

But the apartheid government revoked Makeba’s passport while the singer was overseas, starring in a stage musical. Makeba spent the next three decades in exile. With Harry Belafonte’s help, she became a star in the United States... and a prominent critic of apartheid.

Nelson Mandela encouraged Ms. Makeba to return to South Africa in 1990. At the time of her death, she was South Africa’s goodwill ambassador to the world.

In honor of Miriam Makeba, I’m streaming two of her recordings from 1970.

Click here to hear her version of Van Morrison’s “Brand New Day” on my Vox blog.

Then click here for a live concert performance of “Malcolm X,” written by Makeba’s only child, her late daughter Bongi Makeba. This was recorded in Conakry, the capital of Guinea.

Below is a clip from the documentary “Come Back, Africa,” filmed in 1959. It shows Makeba singing in South Africa before her exile.

Posted by Undercover Black Man at 10:55 AM

I have her Self Titled RCA debut on my wall of honor.

My more morbid customers refer to it as the "Great Wall Of Death",but I put up artists as they leave us,not to jack up the prices,but show my respects and often include a post it note of my thoughts.

Surprised there was no mention of her husband in the obit you posted.

^ Which husband? Masekela or Stokely?

When I started getting into international music "Pata Pata" was one of the first songs I added to my collection.

Did you, like many journalism students, do a stint in Obits when you were an intern? I know that some journalists actually like writing them; you seem to.

When my husband heard that Obama's grandmother died, he wanted to confirm it. He couldn't find it on CNN.com or MSNBC. So, I checked your blog and and, sure enough, you had the obit already posted.

Thank you for this one, King of the Obits. I especially liked the Van Morrison cover.

^ Thanks, GG. No, I never worked an obit desk at a real newspaper.

It's the sharing of audio and video clips that fires me up about it now.

I got to see her perform on Paul Simon's Graceland tour. She was amazing. R.I.P.!

Here are my favourite Miriam joints: