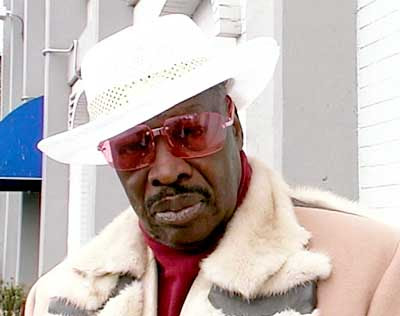 Culture warrior Bob Davis of Soul-Patrol.com has put a lot of sad news in my email basket over the years. Today he reports that comedian Rudy Ray Moore has died. He was 71.

According to EURweb.com, the cause of death was complications from diabetes.

I have blogged about Mr. Moore’s foul-mouthed performance art twice before (here and here). Now let me stream his classic rendition of “Signifying Monkey,” released in 1970 on “The 2nd Rudy Ray Moore Album: This Pussy Belongs to Me.”

Rudy Ray Moore has influenced rappers such as 2 Live Crew and Too Short. Anybody who grew up black in the 1970s has either heard one of his LPs or seen one of his movies. White hipsters started embracing him in the 1990s.

The man made an impact.
Posted by Undercover Black Man at 8:46 AM

Some of his early album covers left little to the imagination. :-)

We used an audio clip from DOLOMITE in HOUSE PARTY...it's playing as Robin Harris sleeps in front of the TV and Kid sneaks out of the house.

Later that year, Eddie Murphy and Arsenio Hall went to see Rudy Ray Moore perform in LA. He was introduced as one of the stars of HOUSE PARTY!

I was always proud that he was proud of the association.

Back in the day, my buddies and I would split school at lunch time just to listen to the Signifying Monkey while folks were at work, it was stupid funny. I also loved his fake martial arts skills as Dolomite, dude was always supercool. Man, we've lost some real pioneers in the last few months.

Okay. This is wrong on so many levels. And totally NOT safe for work. It's the Great Dolemite Charlie Brown.

^It's wrong, but funny! And there's a bunch of them--anyone know the story behind the parodies?

David, I interviewed Rudy Ray for your "Uncut Funk" pub many years ago. He was as gracious over the phone as he was profane in his Dolemite role. Years later, I introduced myself as he signed my "Below the Belt" LP at Tower Records. He reached into a folder and pulled out the "Uncut Funk" interview.

It's a little-known fact that Rudy Ray had been a driver for Huey "Piano" Smith and the Clowns, and his expression "Don't You Just Know It" was the basis for their R&B hit of the same name. His own R&B tracks, collected on the "Hully Gully Fever" CD, are still in print.

He may be gone, but the legacy lives on.

^ How great to hear from you, Charles! Thanks for visiting. I hope all's well with you.

I have not heard any of Rudy Ray's R&B.