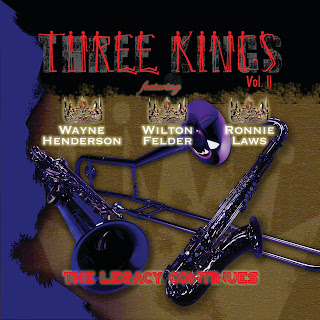 Veteran horn men Wayne Henderson, Wilton Felder and Ronnie Laws have just released their second album under the “Three Kings” banner. (Their first one came out in 2004.)

Henderson and Felder were leading voices in the Jazz Crusaders going back to 1960. Laws’s older brother Hubert played in an earlier version of that band.

Now, I can’t tell you where to find “Three Kings, Vol. 2: The Legacy Continues.” But I do have a FREE MP3. And it’s kinda funky.

Co-written by Henderson and Laws, “Blues in the 5th Ward” was originally recorded for a 1992 Ronnie Laws album.

More on this album

I iiked it but not in a BIG way. I wish the horns had been mixed a little higher.

When I first saw this title, I thought it was a reference to one of my fave jasz Xmas tunes...."We Free Kings" by Rahsaan Roland Kirk