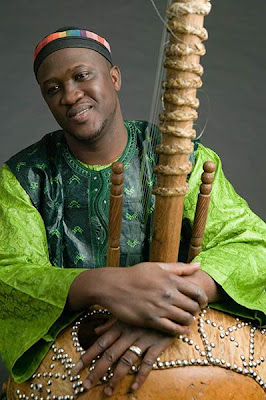 Mamadou Diabate of Mali is a master of the kora, a West African string instrument. For generations, music has been a family tradition; Mamadou’s cousin, Toumani Diabate, is also a world-class kora player.

Mamadou Diabate now lives in New York state, and he tours the world displaying his chops.

A track from Diabate’s 2008 album, “Douga Mansa,” is available as a FREE MP3. Click here to hear “Bolomabory” on my Vox blog.

You can stream more tracks from Mamadou’s albums on his MySpace page. But it’s really mind-blowing to watch him with your eyes. Below is a video clip from Malian television.

Posted by Undercover Black Man at 5:10 AM

Now that was fantastic! It was an incredibly hypnotic blend of melodic motifs and polyrhytmic timing, ...I was hopping off the couch just listening to it. Amazing!!! Kinda had the same effect of hearing Ravi Shankar.

^ Glad you liked it! I've heard the kora being played before... but have never seen it until this.