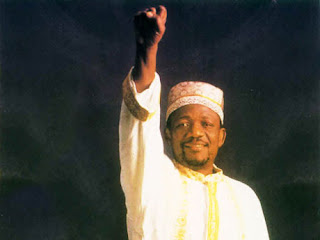 Only while putting together my African Music Weekend did I learn that Sonny Okosun, an international music star from Nigeria, died in May.

This didn’t make big news in the United States, even though Okosun died at Howard University Hospital in Washington, D.C., from colon cancer. (The Washington Post still hasn’t reported his passing.)

Okosun was the first African pop star to perform in post-liberation Zimbabwe.

In Okosun’s honor, I’m streaming a track from his 1981 album “3rd World” on my Vox blog. Click here to hear “Olu Ebube.” The rhythm-guitar part would do James Brown proud. (This album, re-titled “Liberation,” is widely available in digital form.)

Here is an editorial tribute to Sonny Okosun from the Nigerian newspaper ThisDay.

And below is some supremely cool footage of Okosun working on his 1979 album “Power to the People.”

Thank you for mentioning this.

I wonder why his family did not issue a press release to the Washington Post....

Yeah... the New York Times didn't even write about it till a month after the fact.