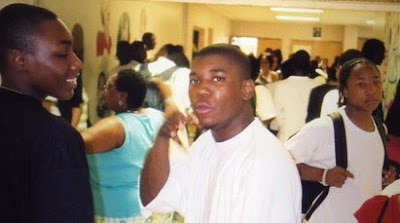 If you’re in need of new reasons to get depressed about inner-city schools, HBO has something for you tonight at 9 p.m. (Eastern and Pacific time). It’s the debut of a 2-hour documentary titled “Hard Times at Douglass High: A No Child Left Behind Report Card.”

HBO is marketing “Hard Times at Douglass High” as a critique of President Bush’s education plan. But according to reviewers, the documentary is less about policy than about the thoroughgoing dysfunction of ghetto culture.

“[This] dismaying film isn’t really asking whether No Child Left Behind can help Douglass,” writes a New York Times critic. “It’s asking whether anything can.”

A National Review Online reviewer sees “Hard Times” as an exposé of incompetent teachers and administrators; “Many are just plain bad at their jobs.”

I might catch this one on a later showing. Don’t think I’m up to it tonight. Below is a 1½-minute clip from the documentary:

How many will be "shocked" at what they'll see?

Thanks for the heads up, UBM! But, I don't think I'll catch it tonight either.

I hope you don't mind if I post this link. Tomorrow (6/24) at 10pm* PBS is airing Traces of the Trade about the largest slaving-trading family in US history.

I wonder if I'll be "shocked" at what I see?

^ Bklyn6, you post any links you want to here, any time!

"Traces of the Trade" looks fascinating. I hadn't heard of it.

Bklyn6 is smart for not watching this show. Slavery, Jim Crow and white supremacy caused this problem and nobody can tell him otherwise.

It's like a private detective having video of a cheating wife caught 'in flagrante delicto'. You want to watch, but the truth is too difficult to bear...vince

In the first place, Vince, Bklyn6 is a woman.

In the second place, don't project your obsessions onto other people.

true dat Vince....unlike you, who can stand and stare for hours at the act....but refuses to look down at the root cause.

Uh, "The Wire" Season Four covered this well and with compassion. 'Nuff said.

In the mid 80'sI was substitute teacher in the NYC school system and then a full time teacher at a Junior High School in the South Bronx.

They gave me the special ed kids. The administration required no lesson plans from me, gave me no resources, not a book, not a single nothing.

So I decided to teach these kids Algebra and introduce them to calculus. I searched for textbooks far and near, and finally found a stack of 1960s text books in a closet off somewhere.

That guy who is supposed to be a teacher, I'd kick his dumb ass for giving these kids instructions for scenarios on why they are failing instead of telling them the truth.

I just finished watching the program. I teach elementary school and see similar behaviors in our younger students.

NCLB is grading schools and punishing teachers without offering solutions. The program shows that it is a much bigger fight than what goes on in the classroom. First, you have to teachers (the certified kind), then you have to get the students to attend class daily and on time. The street are far too enticing for many youths and there is little or no value on education.

The most disturbing part(s) were when the young man and the ladies were hanging out after school and the guy started throwing punches and hitting the girls. This was happening while they were supposed to be in class. The other part was the locker room after the basketball game when the players were pretty much done with life after losing a ball game and selling drugs and jail were all that black men were ever going to do (without basketball).

^ Thanks for that, Adrean.

I am pretty new to this neighborhood!!

It is a shame that only the negative and dysfunctional is on open display concerning black teens when there are millions who are trying to make it in spite of enormous odds stacked against them that they had no control over...

Thanks for mentioning this documentary!

Traces of The Trade is supposed to be ground-breaking! I hope it lives up to the trailer clips!

I grew up in Batimore and anybody above the age of 35 has a parent who went to Douglass because it ws the only school Black people could attend. Thurgood Marshall, Cab Calloway, Judge Harry Cole (the first Black elected to the MD Supreme Court), every Balck elected official, every Black doctor -basically everybody in town who is now Black and successful. and that was during the height of Jim Crow.

Douglass was an excellent school until just about 1972, post-riots, when those parents who could got better jobs, better ideas about how they wanted to raise their kids and got out of that neighborhood. Those who stayed are the people our parents would not let us play with because their parents lacked values, ambition and the ability to discipline. And now those people have kids and they're at Douglass.

The most shocking thing swas not the boy fighting the girls, it was showing Parent Night and having only 1-3 parents show up per class.

^ That sums is up powerfully, Eric.

In D.C., the equivalent high school was Dunbar. You ever look through a yearbook from the 1950s of a segregated black high school? It's like a window onto a world we can hardly imagine ever existed. Them kids were learning Latin!

my kids aren't attending an inner city but they are in public school. my son has learning disabilities, including ADD, which all his teachers are aware of. still, i had one teacher threaten to send him to the "behavior" center because "he wasn't paying attention." i had to explain that this would be like sending a child with asthma to the behavior center for wheezing.

my kids get what they get because i scream and yell. i consider that my job. (and i do work also).

this doc is 4 years old. the school administration was completely replaced and a partnership formed with johns hopkins after the filming was completed.

would love to know what the class of 2008 looked like.

Baltimore also has a Dunbar. It was Dunbar for the Eastsiders and Douglas for the West.

I was on a "It's Academic" style team on Latin in junior high in Baltimore in the late 60s.

"because their parents lacked values, ambition and the ability to discipline. And now those people have kids and they're at Douglass."

I agree with the second sentence, but over time I've found that there are literally thousands of stories as to how these families came to be in the position that they're in. Some self-imposed....some luck of the draw....and some simply overwhelmed by conditions beyond anyone's control.

None of the students' behavior shocked me. I visited dozens of jr. high and high schools in Baltimore in the 80's and 90's both with the Boy Scouts Career program and as part of a technical recruitment program. Up close and personal.

And what brings it home (literally) for me is that one of the reasons I'm no longer participating in these types of programs or prepping inner city kids for the SAT's is because I'm currently raising two kids whose mother dropped out of Douglas.

What did shock me was the number of unqualified teachers who were teaching there. I had no idea that conditions had degenerated to that level.

I'd love to compare the conditions at Douglas with those at Patterson HS. in Highlandtown.

You're right about Dunbar in Baltimore. Forgive my west side leanings.

On that SAT thing, even for those of us with a little bit of luck I remember that being something that was completely foreign. The PSAT was thrown at us one day damn near pop-quiz like. I knowcked that out of that parked but admitted my scores on the real deal were less than stellar.

I only found out years later that you could study for the SAT as well as take it again and have the higher score count. But then again I was first generation college and that whole prep for college thing was something I had to find out on my own.

I wasn't accusing some of those left-behind parents, just saying that there was a sense by some parents of a need to strive and an attempt to distance us children from influences that might negate that - whatever may have caused those influences.

forgive the typos. comes from watching MSNBC while typing..

I meant "admittedly" my SAT's sucked.

des said...
A few notes: Baltimore also has a Dunbar. It was Dunbar for the Eastsiders and Douglas for the West.

eeaster said... went to Douglass because it was the only school Black people could attend.

You both have very selective memories. The Baltimore I lived in had Carver, City College and Poly in the city. How about Edmondson and Forest Park. I bet you had to walk 10 miles to school and it was uphill BOTH ways. Whitey probably took your lunch money every day too.

In the first place, Dave, are obsessions the same as opinions? And, secondly...

If they are obsessions, they are mine...

Now, if you don't mind, and even if u do, either come correct or BDFU, grown folks is talking.

no prob bro....we all couldn't grow up in god's country (eastside)....and I feel you on your last paragraph.

However, on the opposite side of those families that did want to move up and out....there were others who quite simply just wanted to lay in the gap, "get over" as they used to say....gaming the system for whatever they could get. And some of the holes that they dug trapped generations.

On the SAT front. After working with a small group for a few weeks, I'd tell them it was time for a practice test. Invariably, about 90 percent of them failed. They didn't feel too bad until I revealed to them that they just failed a sample GED test.

Then I'd tell them that it's harder for someone to pass the GED than it is to graduate HS because you had to store 4 years worth of knowledge at one time....as opposed to memorizing a few weeks material at once....as most of us did in HS. And that anyone who passed GED shld be given the respect they deserve.

Back to the subject of Douglas. Did you ever run on the track there when it was composed of metallic cinders? When I ran with Durant's track clubs (Easterwood and Edgecombe Circle), we'd practice in that quagmire.....and when it came time to run in meets elsewhere.... we felt like we'd gone from quicksand to solid ground.